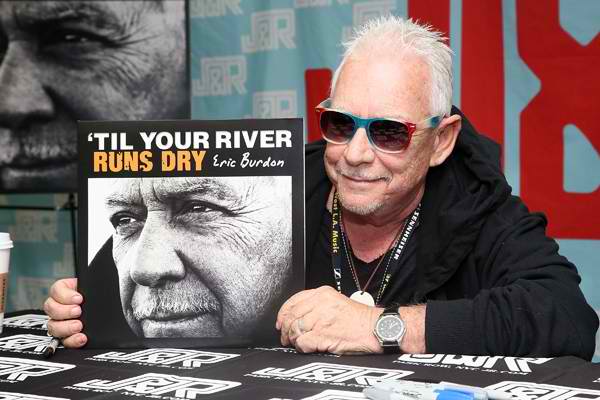 Say what you will about how great the Rolling Stones are or aren’t as they continue to roll on their 50 & Counting tour, but don’t forget they’re not alone among ancient British Invasion acts out there. Indeed, Eric Burdon, who performed this week at a special invite-only birthday celebration at the John Varvatos store in the former CBGB’s showed at least as much life as Mick and the lads–not to mention the ghosts of all the punk rock acts entombed in the Varvatos location that once was the historic club.

Burdon, who just turned 72, is back in full force following full recovery from the back surgery that sidelined him last year, holding back his acclaimed new album ‘Til Your River Runs Dry until January—coinciding with the 50th anniversary of Burdon’s own historic band The Animals. The album also returns Burdon to the ABKCO, home of both the early Stones and Animals catalogs; Burdon considers it one of his most personal albums ever, containing songs that reflect his unwaveringly progressive commitments politically, socially and especially environmentally.

His hour-long career overview set even had him wearing a gray peace sign on his black t-shirt to go with his usual color scheme (offset only by rainbow shades) His voice remains, in Varvatos’s own introductory words, “one of the greatest in the history of music.”

Burdon opened with his autobiographical late-edition Animals hit “When I Was Young,” which segued directly into the early Animals classic “Inside Looking Out.” It seamlessly flowed, after a one-second pause, into the new album’s impassioned lead track/first single “Water.” The song, Burdon says, came out of a conversation a few years ago with Mikhail Gorbachev, who has devoted himself to promoting water awareness; as Burdon has lived in the desert regions of Southern California since the 1970s, water conservation was already near and dear.

Eric Burdon & War’s warhorse “Spill The Wine” followed and showcased Burdon’s band made up of two guitarists, two keyboardists (one playing flute for “Spill The Wine”), two drummers and one bassist. He also performed the new album’s two Bo Diddley tributes: “Bo Diddley Special,” a “farewell song” he wrote to honor one of his blues/r&b idols, and Diddley’s own “Before You Accuse Me,” which closes the album. Another debt was paid to blues-boogie king John Lee Hooker via an acoustic slide guitar version of “Crawling King Snake,” a blues standard associated with Hooker, who gave The Animals songs including their cover hit “Boom Boom,” and Burdon a lasting memory—which he recounted—of wearing a “Hooker” t-shirt as a kid.

Burdon pulled out the stops on The Animals’ signature hit “House Of The Rising Sun” and also performed two other early Animals classics in “It’s My Life” and encore “I’m Crying”—for which he got the crowd moaning along. And while he notably neglected another Animals anthem in “We Gotta Get Out Of This Place” (characterized by Bruce Spingsteen as “every song I’ve ever written”), he did perform it Monday night when he sat in with the Letterman band, other highlights there including his rewrite of “Rising Sun” to honor fellow guest Mark Harmon, and “Don’t Let Me Be Misunderstood” (not to mention Paul Shaffer’s use of “Sky Pilot” as intro for “The Top 10 Things You Don’t Want To Hear From The Person Sitting Next To You On A Plane”).

For the record, Burdon sounded way better than bland balladeer Luke Bryan, the official music guest (and 2013 Academy of Country Music Entertainer of the Year), and afterward marveled at seeing a Frank Lloyd Wright building in Mason City, Iowa, when he stayed over there while performing at the annual Buddy Holly tribute show in nearby Clear Lake in February.

Meanwhile, Burdon is finishing up a memoir, “Breathless,” for publication late this year. He was greeted backstage at Varvatos by The Dictators’ Handsome Dick Manitoba, wh kvelled over both Burdon and fellow attendee Lou Christie. Christie, who’s readying the next two episodes of his periodic oldies show on SiriusXM’s ‘60s On 6 channel, recalled headlining shows in the Deep South in the mid-‘60s with bands like The Animals and The Who (“I was wearing white pants and fringe before Daltrey!”).

Birthday boy Burden was only concerned that his show was too loud—which it wasn’t.