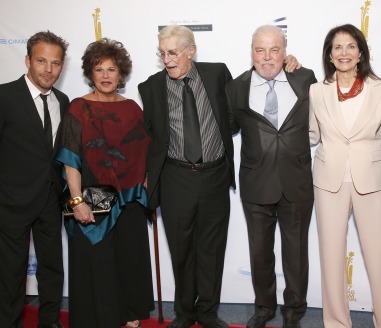 LEAH SYDNEY reports from the west coast: Actor Stephen Dorff was last seen in Sofia Coppola’s “Somewhere” enjoying a private pole dance in his room at the Chateau Marmont. Since then? What would come next? Well, he’s learned Hebrew for a movie called “Zaytoun,” which screens at the Israel Film Festival in Los Angeles. Stephen told me at the festival’s opening: “I spent over fourth months in Israel, and I learned Hebrew for the movie.  My Dad is Jewish, my Mom is Catholic but I was raised neither, which was probably for the best.  But I always wanted to go there, I felt a paid a tribute to that side of my family and my grandparents.”

Dorff is picky about his roles. “The really good films are few and far between. I have really intense tastes that make it hard to kind of play ball.  But it’s all good, it always works out.”  Dorff joked: “If I keep reading these bad scripts, and they’re big movies too, I might open a car wash.”

Martin Landau was among those honored on the opening night, which was emceed by funny comic Elon Gold. Former Paramount chief and now philanthropist Sherry Lansing was also honored. She told us that she’s been traveling with her husband, noted director William Friedkin, to promote his latest book, “The Friedkin Connection:  A Memoir.”  The great singer and actress Lainie Kazan (just watch her in “My Favorite Year”) told us that, “I’m singing all over the place.  I’m just finished an indie film called, ‘Finding Joy,’ I’m busy all the time.”

The Producers Guild of American is getting into the digital age as we all are by holding their inaugural ‘Digital V.I.P’ awards, honoring nine Innovators, Visionaries and Producers, hence V.I.P, who have made their mark on in digital entertainment.  Held at the home of Entrepreneur Elon Musk, who founded no less than PayPal, Tesla and SpaceX, the event featured bedazzled dancers hoisted from the ceiling pouring Champagne to anyone asking.  Guests included the President of the PGA Mark Gordon, Morgan Freeman was there with is producing partner Lori McCreary,  John Lasseter, Lawrence Bender and more.

The Troubadour continues to be one of LA’s most venerated and plugged in venues.  Rod Stewart is playing there tonight, partaking in a fan Q and A to hawk his new album. ‘Time.’  Depeche Mode follows on Friday put on by the popular LA station, KROQ, and no other than the swinging Troubadour himself, Tom Jones, plays there on May 11th and 12th.

Tonight starts the swanky ‘Paris Photo Fair,’ showing international celebrated photography, which is taking place on the Paramount Lot throughout the weekend.  The private opening night tonight, or ‘Vernissage,’ will include bashes thrown by Armani  hosted by Sean Penn, The French Embassy, The Wall Street Journal and BMW.  Phil Collins, Catherine Opie and Mad Men’s Matthew Weiner are among the speakers set for this cool weekend.

Weaving in Politics with Hollywood, ‘Chasing The Hill,’ Creator Brent Roske’s talked about web series, what the DC publication ‘The Hill’, says has a cult like following in DC, now has caught on in LA.  Emmy award winner Richard Schiff plays a scheming Democratic Karl Rove like character in the cutthroat world of politics.  Sharon Lawrence, Robin Weigert, Melissa Fitzgerald round out the cast in this critically acclaimed series which was just nominated for a Webby award, opposite Tom Hank’s Electric City, and AMC’s The Walking Dead.  Roske, a longtime writer and director also got some cool cameos from MSNBC’s Lawrence O’Donnell, VA Governor hopeful Terry McAuliffe and Political Consultant and former Clinton White House staff Ian Alberg.  Alberg, who has been with the Clintons for years, has a clever stint as Schiff’s right hand man.  Check it out at: www.chasingthehill.com