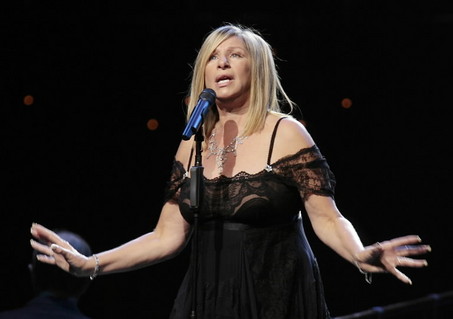 So there they were: in the audience at the Lincoln Center tribute to Barbra Streisand were disgraced former Congressman Anthony Weiner and his wife, Huma Abedin. They were there with Bill and Hillary Clinton. The former president, appearing to cheers, was introduced by actor Ben Stiller before he introduced Streisand. The famed singer-actress-director was awarded the Film Society’s Chaplin Award in front of a glittering crowd that included plenty of luminaries.

Tony Bennett, Liza Minnelli, and Wynton Marsalis performed on her behalf. A range of actors from Kris Kristofferson and Pierce Brosnan to Blythe Danner, Amy Irving, and George Segal toasted Streisand. Video tributes were sent by Robert Redford and Omar Sharif. Lyricist Alan Bergman did something he’s never done before: he sang, sort of, “The Way We Were.” It was very touching.

Streisand and husband James Brolin watched the proceedings from a box in Avery Fisher Hall with Universal chief Ron Meyer and his wife. Below them the crowd up front included Michael Douglas and Catherine Deneuve, past Chaplin recipients, who spoke also even though they have no obvious connection to Streisand.

The evening was punctuated by clips from all the Streisand movies, including the three she directed: “Yentl,” “The Mirror Has Two Faces,” and “Prince of Tides.” In the case of the latter, it was kind of shocking to see that Nick Nolte has aged very badly while Streisand basically looks the same.

And then there were the Weiners, on their rehabilitation campaign. Given the response they had in the corridor outside the theater, I don’t think Weiner is going to be mayor any time soon. New Yorkers are too smart for this sort of thing.

But back to the event: The musical numbers were very good. Liza, who should get the Chaplin award herself, was in excellent voice. Tony Bennett, singing Chaplin’s “Smile,” remains a mystery. He’s 86 years old and yet his phrasing and timbre just get richer. Marsalis turned out a nice “Hello Dolly!” on his trumpet, recalling Louis Armstrong.

The speakers: Clinton got off to a shaky start trying to reference Streisand’s role as a sex adviser from “Meet the Fockers.” “We can watch Barbra give sex advice to old timers…like me!” he said. That got a big but awkward laugh. Clinton straightened out fast, and introduced Hillary, who got a huge ovation from the New York crowd.

Streisand gave a passionate and well written speech that lasted about 17 minutes. She really gave a thought out speech, too. “I wanted to play the great classical roles but no one would hire a 15 year old Medea,” she recalled. “Thank god I was given a good voice.” When she was 16 and in a play she put a piece of chocolate cake just out of sight of the lead actor, whom she didn’t find attractive. She was already directing and “thinking conceptually.” She noted that William Wyler directed 12 actors to Oscars before he got to her in “Funny Girl”– and she was his 13th Oscar winner.

Streisand said: “As actor, I like the serve the director’s vision, if he or she has one.” She said that with Peter Bogdanovich, who directed her in “What’s Up Doc?”– maybe her best film–she did everything she was asked. “I still don’t understand the movie though,” she joked.

She did address her notorious penchant for perfectionism. “I would say I am a pragmatic perfectionist. This is the 29th draft of this speech.” Big laughs. She said she was so insecure about “Yentl” that she didn’t even put her name on the script. “I’ve always been called bossy and opinionated,” she said. “Maybe that’s because I am!” Another big lkaugh. “Three cheers for bossy women!”