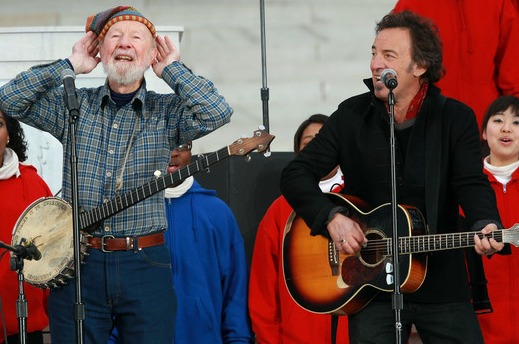 It was a busy night in New York. Bruce Springsteen and Patti Scialfa came out to support Steve and Maureen van Zandt, who produced the Rascals show on Broadway. “Sopranos” creator David Chase and his wife Denise were also there, as was Vincent Pastore and long ago Springsteen manager Mike Appel, as well as Bruce’s current managers Jon Landau and Barbara Carr (current like since 1977). The Rascals’ “Once Upon a Dream” plays until May 5th at the Richard Rodgers Theater. After the show, everyone went over to Sardi’s, where Bruce hailed Little Steven as an “entrepreneur.” Rascal Eddie Brigati praised van Zandt for his passion. “Anyone could have tried this but only Steven could have pulled it off. Back in the day we had no one. We didn’t even have a bass player. We did everything on our own. That’s how we got into trouble.” Indeed. Music producer Joe Mardin, son of the late Arif, who produced the Rascals great hits, stopped by to say hi, too…

…Earlier in the night, Vanity Fair kicked off the Tribeca Film Festival with their annual cocktail party at the State Superior Court in Foley Square. Graydon and Anna Carter hosted along with Ronald Perelman and Robert DeNiro, and Jane Rosenthal and Craig Hatkoff.  Peggy Siegal brought “Great Gatsby” director Baz Luhrmann– his first outing since “locking” the film ten days ago. “I’ve been working on the soundtrack,” he told me. “Wait til you hear Fergie, Beyoncé and Jay Z.” Plus, it turns out that Bryan Ferry sings jazz all the way through the movie.

Some other guests–whom I was knocked out to meet– were Charles Sturridge and his wife, Phoebe Nicholls. He wrote and directed the all time great mini-series, “Brideshead Revisited” in 1981. Nicholls played Cordelia. They are married, and their 28 year old son, Tom Sturridge, is a famous young British actor now on Broadway with Alec Baldwin in “Orphans.” He is also engaged to Sienna Miller, and they have a nine month old daughter. So they are all here for “Orphans.” Sienna is glowing, and now she’s part of two amazing families.

Also at Vanity Fair: lots of movers and shakers in the media biz, from New York Times editor in chief Jill Abramson to Norm Pearlstine who runs Bloomberg News to Sir Howard Stringer, Gayle King, Charlie Rose, Wendi Deng Murdoch, Perri Peltz, Drew Nieporent, Tory Burch, Whoopi Goldberg. Sir Howard is upbeat about his impending retirement from running Sony, especially since I told him I bought a new Vaio laptop over the weekend. He told me: “For my retirement, the Sony owners sent me a big James Bond box filled with bobble-heads of all the Sony executives. When you touch each one, they have a recording saying nice things about me.” Of course they do! We’re going to miss Sir Howard. A lot.