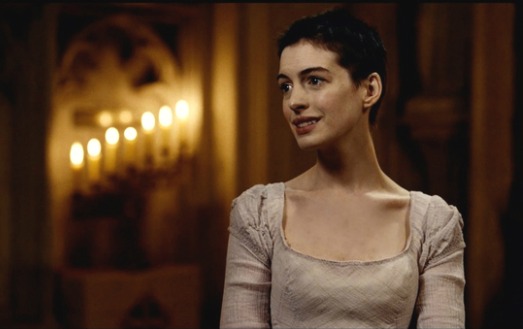 Everyone is picking on Anne Hathaway. I’m a little over it. Aren’t you? She won the Oscar and all the other awards for her role as Fantine in “Les Miserables.” Was she the best of all supporting actresses? Let’s put it this way: the dye was cast. Anne had already been superb in “Rachel Getting Married” and had gotten an Oscar nomination. She and Amy Adams represent the youth of the Academy. They each came out of the gate fast. Along with Jennifer Lawrence and Jessica Chastain, Hathaway and Adams represent the immediate future. We’re lucky to have all of them.

What is it that irks people about Hathaway seems to be what drove them crazy about Gywneth Paltrow: she seems to have it all. And she flaunts it. Great family, husband, great looks, loads of talent. She can sing like a bird. She looks good in everything. She’s smart. She’s quick. Sometime she gets ahead of herself, forgets to thank her director (Tom Hooper) or goes all schoolteacher on the Broadcast Critics for not spelling her name right (there’s an ‘e’ on Anne).

Personally, I don’t care if she wore Prada or Valentino or Sears. When Hathaway arrived at the entrance to the red carpet, I thought she was clever: her dress was simple and elegant. She knew she was going to win. She didn’t have to compete. Other than omitting Hooper from her thank you’s, her speech was very, very lovely. At the Governor’s Ball, I could tell she was relieved it was all over at last. And I’ll tell you what: her terrific family is always all around, and she is very respectful and there is a lot of love. This won’t be one of those deals where the star stops speaking to the mother.

So, really, let’s get over it. Anne Hathaway is here to stay. And it’s a good thing. She’s not Taylor Swift–she hasn”t forced her personal life in our faces or capitalized on sadness or scandal. You may recall she had a little scandal when she dated a man who was a conman. He went to jail. She never spoke about it. If she had, there would be criticism. Now she hasn’t, and the internet wags say people “hate” her. This is utterly ridiculous. Get over it. I’m excited to know what she’ll do next– although I think broke that story. http://www.showbiz411.com/2013/02/22/exclusive-anne-hathaways-next-film-a-rock-music-indie-but-she-wont-sing

So everyone, cool it.