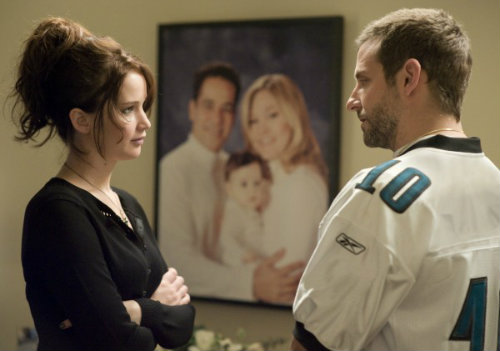 The only big award lost was Bradley Cooper, who was just as pleased to see veteran John Hawkes pick up Best Actor for “The Sessions.” Helen Hunt won Best Supporting Actress for “The Sessions” as well. And “The Invisible War” won Best Documentary. “Amour” won Best Foreign Language Film.

Andy Samberg was sort of brilliant as host of the show, which airs tonight on the IFC Channel. He gave a classy tip of the hat to long time show host John Waters. The Spirit Awards run much fast now as they are taped without commercials, then show the same evening. There are no messy breaks.

The Spirit Awards are not exactlu an augur for the Oscars. They’re really for movies that cost less than $20 million to make. Still, repeats are not unusual. And the wins here mean that “Silver Linings” has a lot of support. This may translate into bigger things at the Oscars on Sunday.

Because the Spirit Awards are for free spirits, the show offered Jameson Irish Whiskey on the rocks to anyone coming onto the red carpet. Major amounts of liquor flowed all through the afternoon, which made for some uneasy moments. Chief among these was the writer of “Safety Not Guaranteed,” a young man named Derek Connolly. He got so toasted that by the time he won Best First Screenplay he was in trouble.

Connolly gave an incoherent rambling speech and finally had to be cut off by actress Kerry Washington. When he left the stage Connolly was so out of it he had to be carried out of the main tent where the ceremony continued without him.

Meanwhile just to add to the drama, actress Emily Mortimer of HBO’s “The Newsroom” got busy on the red carpet. She and a crew filmed a short scene for a British limited run show during the carpet press walk with a major star doing a cameo. I can’t say who it is, but we’ll know in time. The six episode miniseries may not be seen in the US because of conflicts with “The Newsroom.”

Best dress on the red carpet went to Jennifer Lawrence wearing a Lanvin black number that was the most sophisticated and beautiful outfit I’ve ever seen down at the Spirit Awards. Most everyone dresses down for this event. Not Lawrence, who is a budding superstar at age 22.