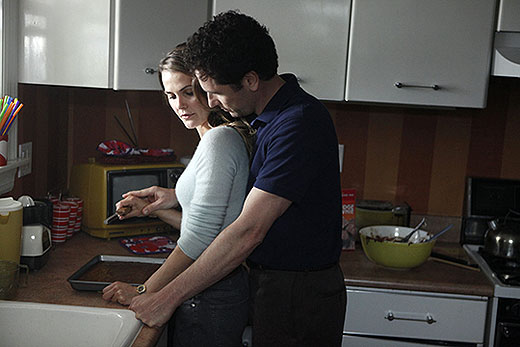 Remember when Keri Russell made her debut as Felicity, a conflicted young woman coming of age in New York, who everyone loved? Well she’s grown up. In the first few scenes of her new series, “The Americans,” Russell erases Felicity forever with some um, in-felicitous activities as a Russian spy that will remind you why cable is not broadcast TV and HBO isn’t the only place where you can get away from Nickelodeon.

The new series called “The Americans” is really really really not based on my favorite Henry James novel, “The Americans,” published in 1877. Oh no no. It’s an original idea about a pair of Manchurian Candidate sleeper Russian spies who are sent from Moscow in 1981 to Washington to do their dirty work. Our favorite Welshman, Matthew Rhys and Russell are the attractive, engaging couple with two pre-teens who move into a DC suburb with plans to blow everything up.

By coincidence, a hot shot FBI agent (the very engaging Noah Emmerich) and his wife buy the house next door. The agent, named Beeman, quickly becomes Gladys Kravitz to Philip and tk’s Samantha Stephens. He’s determined to prove they’re up to no good. They stay one step ahead of him. There are a few laughs, but hilarity does not ensue. This is a serious show, filmed like a movie, with some decided sex and violence. The first episode, set for this Wednesday, should hook audiences for several seasons.

Last night F/X threw a swanky and expensive premiere for all their peeps involved with “The Americans” at the DGA Theater and then the replica of the Russian Tea Room on West 57th St. Very clever– RTR because Rhys and Russell are Russian spies. There was blini and a little caviar. Also lots of famous pals to help toast the show including Taraji P. Henson, Patricia Clarkson, Amy Ryan, Adam Driver from “Girls,” Richard Kind, Katherine McPhee from “Smash,” as well as Rhys, Russell and co-star Margo Martindale. Adam Arkin, the gifted actor (“Chicago Hope”) and son of the great Alan Arkin–riding the “Argo” wave– came with his wife, as well.

“The Americans” is shot in Brooklyn, which is where everyone at the party seemed to be from. (Brooklyn is near Manhattan, if you don’t know.) Everyone from F/X was there, and there were a lot of gracious speeches from the podium prior to the screening that thanked everyone in the neighboring borough and beyond. (Oh how we longed for commentary from the Dowager Countess!) Anyway, the F/X people are very very nice.

As for the Russian Tea Room. What can I say? Closed in December 1995, the real RTR was gutted and rebuilt. Everything in it was auctioned off; the staff, including my old pal Ona D’Sousa, who ran the room with beauty and wit for almost two decades. Warner Le Roy reopened it, it closed again, and opened in this replica version in 2006.

I sat all night in Booth #1 where exactly 30 — yes, thirty– years ago I had lunch with Tony Randall and legendary press John Springer. I recalled all the amazing people who’d come to lunch — the real RTR was like a fantasy theme park for everyone in show business at lunch time. You’d hear people talk about the Four Seasons, 21, or later, Michael’s and Trattoria del’arte. Across the street was Fontana di Trevi, where famed literary agent  Candida Donadio held court every day speaking Italian to the ancient waiters. I used to meet Mike Hall in the RTR, where he’d tell me about planting items in Walter Winchell’s column. The new owners have replicated the red banquettes, but the paint is too fresh and the paintings on the walls are too planned (it used to be very haphazard). There was no sign of Michael Korda or Sydney Pollack (yes they filmed “Tootsie” there), or Edgar Sherick, or Irving Mansfield and Jackie