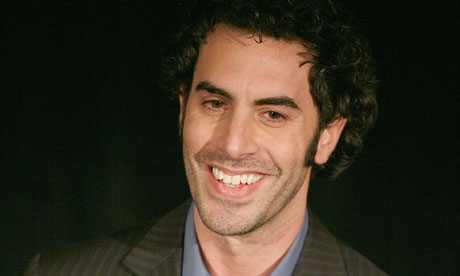 Exclusive: Catherine Zeta Jones just presented the clip from Best Picture nominee “Les Miserables” on the Golden Globes. But she wasn’t supposed to. And the person who was looked pretty unhappy from his seat.

Sacha Baron Cohen, who performs “Master of the House” with Helena Bonham Carter in “Les Miz,” was the actor selected by the film’s company to present their film. But I can tell you that Hollywood Foreign Press Association president Dr. Aida Takla Reilly despises Cohen and refused to allow him on the show.

I’ve known this for several days, and confirmed it will all parties. The backstage fight over this was bitter, and went all the way up to NBC and Dick Clark Productions. At one point, it was confirmed that Cohen had been reinstated. But when Zeta-Jones appeared–someone who had nothing to do with the movie– even Cohen looked disappointed. Later in the show Cohen was thrown a sop–and got to introduce the Best Animated Films.

The history of this is that Reilly has disliked Cohen ever since he sent two scantily clad girls to the HFPA offices to promote “The Dictator” last year. Reilly tried to ban Cohen from all HFPA press conferences. This summer, the story goes, and Reilly confirmed to me, she visited Kazakhstan, the country lampooned by Cohen in “Borat” several years ago. When she returned she decided that Cohen had maligned that country so badly he didn’t deserve to be on the Globes.

The idea of the HFPA censoring an actor because of his art, I think, speaks to the hypocrisy and unprofessionalism of the Hollywood Foreign Press and the Golden Globes.

In the end, “Les Miz” and Universal prevailed, if only because NBC is part of Universal. Otherwise, Cohen might not have appeared at all.