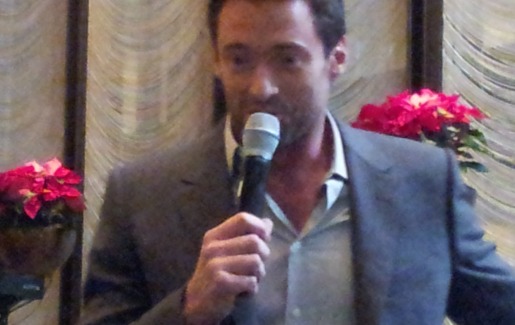 Most of the cast of the movie “Les Miserables” made it to the famed Four Seasons pool room today for a celebratory lunch. They’d been been to bed around 3 am, they explained, partying after the premiere of the magnificent film musical last night at the Museum of Modern Art, and then at an after party.

“The last time I saw Samantha Barks,” Jackman said, “was at 3am in her pajamas in the lobby of our hotel!”

There was supposed to be a Q&A after lunch, and four chairs were set up for that purpose.

But director Tom Hooper didn’t like that idea. “Can’t we do something else?” And so, they did: Hugh Jackman, Anne Hathaway, Samantha Barks, Eddie Redmayne and the kids from the cast serenaded the lunchers with an impromptu take on “Have Yourself a Merry Little Christmas.”

This was after,  mind you, Barks, Hathaway, and Jackman each sang for the group that included Universal execs as well as “Lion King” creator Julie Taymor, actresses Kim Cattrall and Dana Ivey, Universal Pics execs, plus New Yorker writer-editor Rick Hertzberg and a variety of media and showbiz types. With four floor to ceiling Christmas trees lit up around the pool, it was quite an event for Redmayne. He’d never been to the Four Seasons even though it figured largely in the Broadway play for which he’d won a Tony called “Red,” about artist Mark Rothko.

Hathaway was excited because, she said, she’d been trying out different spots under the Brooklyn Bridge acoustics-wise for singing. “I may just try Christmas caroling and see if anyone joins in,” she said.

Before the “Les Miz” gang leaped into the fray, singer-songwriter Peter Cincotti took advantage of the piano and performed “Master of the House” for everyone assembled, to rave reviews. That may have been the impetus for Jackman, who admitted he’d never seen a mic he could pass up. Jackman dedicated a song to his wife Deborra-Lee, who was beaming.

The lunch turned out to be a celebration, as well, for the 11 nominations “Les Miz” received today from the Critics Choice Awards.