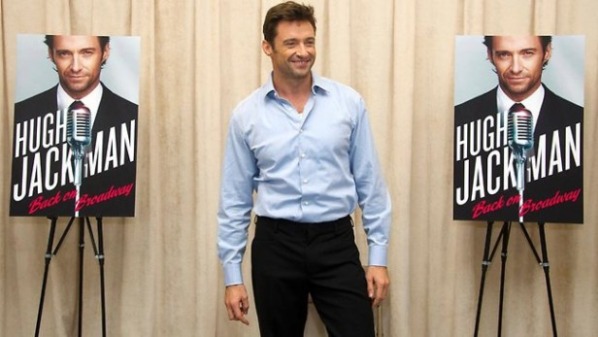 EXCLUSIVE by PAULA SCHWARTZ, special to Showbiz411– Sunday night Hugh Jackman sang Amanda Seyfried the sexiest, most luscious and gorgeous rendition of Happy Birthday imaginable and then he gave her a lap dance.

First, following a private screening of “Les Misérables” at a private soirée at Porter House in Manhattan, Jackman announced, “Tonight is a special night and I am going to sing one song.” Guests squealed and oohed and aahed and moved quickly to get as close to the Jean Valjean actor as possible without getting thrown out by security.

“It is the birthday of Amanda Seyfried. Amanda, come up here,” Jackman told his Les Miz co-star, who plays his adopted daughter Cossette. “Sit here Amanda,” Jackman said in sultry, silken tones, and half straddled her. “I once gave Barbara Walters a lap dance, and I promised her I would never do that again but seeing that she’s not here tonight,” Jackman purred, running his hand down Seyfriend’s dress. The piano chords began to play the familiar birthday song, and Jackman crooned, “She’s very innocent this girl…Amanda…Cossette…Yes it’s one of those father-daughter relationships,” he purred.

After being in the spotlight, Seyfried moved into a quiet corner of the room. After we wished her Happy Birthday, she said. “Well almost. It’s in 2 ½ hours.” She told me she was delighted and happy by Jackman’s serenade but not surprised. “He’s so generous nothing he does surprises me, but I really appreciate him singing one last song.”

It was nearly midnight when Jackman and Russell Crowe  (who has a buzz cut for “Winter’s Tale,” which he is shooting in New York) hugged and we overheard them make plans to meet and bring their guitars.

Tom Hooper — who’d been in Hollywood on Saturday night for the Academy Governor’s Ball– looked tired from non-stop promoting of “Les Miz,” which opens Christmas Day. (“The King’s Speech” also opened wide on Christmas Day two years ago.) I’ve already seen “Les Miz” twice I told him. “Seriously? Were you made to or did you do it by choice?” he asked seriously. As to what he hopes people will take from the musical, he said, he hopes they will “think about some of the bigger issues it talks about, the suffering around the world, but also close to their hearts, about parental love and personal transformation and redemption.”