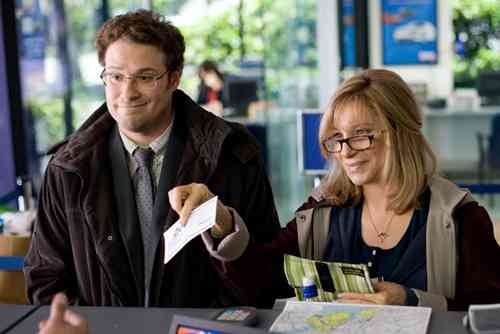 Barbra Streisand made a road trip movie without leaving home. She told the audience at the screening of her new film, “The Guilt Trip,” that one provision of starring in the new comedy was that it had to be shot near her Malibu home. And so it was: “Guilt Trip” tells the story of Joyce and her son (Seth Rogen) driving cross country from New Jersey to San Francisco. But the whole thing was made within 45 minutes of Malibu.

Streisand pretty much got her way for starrirng in her first full length feature since 1996’s “The Mirror Has Two Faces.” She called the new movie, “a long movie” as opposed to her work in “Meet the Fockers” and “Little Fockers,” which required only a few days worth of work each.

The Q&A — held at AMC Century City–was maybe the most revealing Streisand has been a number of mundance subjects in years. We learned that she watches every movie that comes out, in theaters. She’d seen “The Avengers” and “Captain America.” She thought she didn’t know who Jason Statham was, but she did. She was able to describe him down to his beard stubble. She also said that Seth Rogen, the actor, was nothing like her real life son, Jason Gould.

Why did she see so many movies? “I’m in the movie business,” she explained.

Streisand also addressed her habit of collecting all kinds of things, especially antiques, claiming those days were over.

The famed singer-actress-director also conceded that she doesn’t drive if she doesn’t have to. “Sometimes I drive, then I go errrr,” she said, showing a steering wheel out of control, “and my husband says that’s. I say, here, you drive!”

Streisand and Rogen seem to really have enjoyed each other. But only Rogen will be coming to New York to do publicity next week. Streisand, who just finished a mini tour with her three hour concert, is staying put. “I said I couldn’t go to New York, so they brought New York to me,” she said. The Q&A, moderated by Time magazine writer Joel Stein, was simulcast on the internet to screening audiences around the country.