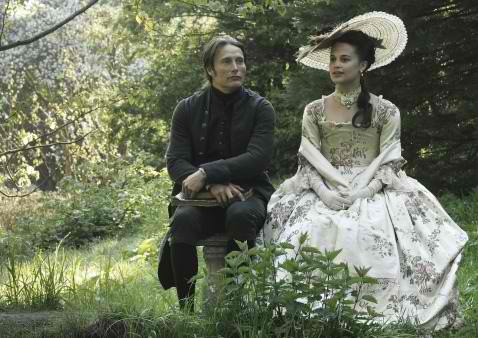 “A Royal Affair” — Denmark’s period drama for the upcoming foreign film category– won the AFI Audience Award last night in L.A.  This grand epic is romantic, heartbreaking and beyond absorbing.  Suffice to say it’s catching Hollywood by powerful surprise.  This gripping film, expertly directed by Nikolaj Arcel, adroitly blends actual historical events in 18th century Denmark, which include the real life affair between Princess Caroline Matilda who was married off at age 15 to eccentric King Christian VII of Denmark.

In history, Caroline began an affair with her husband’s full time physician turned chief minister, the stoic at first then love-struck Johann Struensee (Mads Mikkelson.)  Caroline and Struensee share an overwhelming passion for each other. She is also captivated by his forward thinking, and intellectual investment in the Enlightment.  Struensee’s rise to power and the implementation of these very ideas ultimately sealed their sad fate.

Superb acting, smart directing, perfectly polished dialogue, combined with luscious sets and lavish photography, this film is truly sublime, intoxicating and fascinating on every level.  Add this to a group of foreign films including “The Intouchables,” “Amour,” and “Kon Tiki” that will make this category hotter than it’s been in years this Oscar season.

A Royal Affair opens today in New York and Los Angeles, and rolls out to the art theater market shortly.