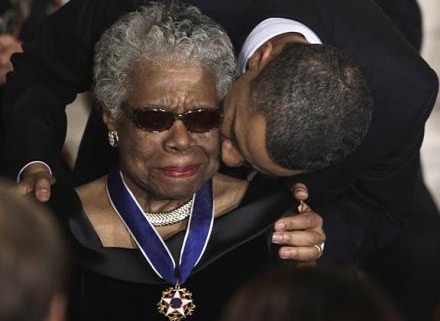 The Obama campaign just played a big big card: a letter sent by Maya Angelou. Now we’re really upping the game. No one says ‘no’ to Maya Angelou.

It is your job to vote. It is your responsibility, your right, and your privilege. You may be pretty or plain, heavy or thin, gay or straight, poor or rich.

But remember this: In an election, every voice is equally powerful — don’t underestimate your vote. Voting is the great equalizer.

Voting has already begun in some states that President Obama needs to win. So please use this handy tool to make sure your friends in those key states know where to cast their ballot. You will be doing them a great favor.

As a country, we can scarcely perceive the magnitude of our progress.

My grandmother and my uncle experienced circumstances that would break your heart. When they went to vote, they were asked impossible questions like, “How many angels can dance on the head of a pin?” When they couldn’t answer, they couldn’t vote.

I have never been happier to have been proven wrong.

And since President Barack Obama’s historic election, we’ve moved forward in courageous and beautiful ways. More students can afford college, and more families have access to affordable health insurance. Women have greater opportunities to get equal pay for equal work.

Yet as Rev. King wrote, “All progress is precarious.”

So don’t sit on the sidelines. Don’t hesitate. Don’t have any regrets. Vote.

Go, rise up, and let your friends and family in early vote states know where they can vote today. We must make our voices heard:

Your vote is not only important. It’s imperative.

P.S. — Not on Facebook? Send your friends to vote.barackobama.com — don’t let technology get in the way of your incredible duty to our democracy.”