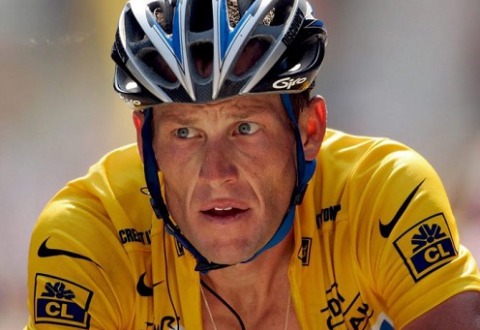 What’s worse? Being dropped by cycling or by Hollywood? On Friday, three days before today’s announcement that he is stripped of all his Tour de France wins and banned from cycling, Lance Armstrong hosted his annual Livestrong benefit in Austin, Texas. The invited celebrities came, but only one of them–Sean Penn– was brave enough to walk the red carpet and talk to the press. Armstrong’s most famous pal, Robin Williams, and singer Norah Jones and other name celebs went in through the back door. There isn’t a single photo of any of them at the event or with Lance. And no mention of Matthew McConnaughey, who used to be Armstrong’s bff and lives in Austin. Ouch! No cycling, no celebs.

Lance Armstrong has been banned from cycling by the UCI, aka International Cycling. They posted their decision this morning. Here it is:

“The UCI has completed its review of USADA’s ‘Reasoned Decision’ and appendices in the case against Lance Armstrong.

The UCI considered the main issues of jurisdiction, the statute of limitation the evidence gathered by USADA and the sanction imposed upon Mr. Armstrong.

The UCI confirms that it will not appeal to the Court of Arbitration for Sport and that it will recognise the sanction that USADA has imposed.

The USADA decision explains how riders on the USPS Team showed no inclination to share the full extent of what they knew until they were subpoenaed or called by federal investigators and that their only reason for telling the truth is because the law required them to do so.

These riders have confronted their past and told their stories. Their accounts of their past provide a shocking insight into the USPS Team where the expression to ‘win at all costs’ was redefined in terms of deceit, intimidation, coercion and evasion.

Their testimony confirms that the anti-doping infrastructure that existed at that time was, by itself, insufficient and inadequate to detect the practices taking place within the team. The UCI has always been the first international sporting federation to embrace new developments in the fight against doping and it regrets that the anti-doping infrastructure that exists today was not available at that time so as to render such evasion impossible.

Many of the USPS Team riders have already acknowledged that the culture of cycling has now changed and that young riders today are no longer confronted with the same choices to use performance enhancing drugs. They are right to do so.

The UCI has recognized the problem of doping within the sport and taken significant steps to confront the problem and to clean up cycling. Today’s riders are subject to the most innovative and effective anti-doping procedures and regulations in sport. Cycling has been a pioneer in the fight against doping in sport under the leadership of the UCI and this role has been recognised by WADA.

Today’s young riders do not deserve to be branded or tarnished by the past or to pay the price for the Armstrong era. Cycling has a future and those who will define that future can be found among the young generation of riders who have chosen to prove that you can compete and win clean.

Riders who were caught doping continue to do the sport a disservice by protesting that the UCI refused to engage with them. The reality is that these riders never contemplated such action until they were found positive by the UCI, and even then they refused to confess and co-operate with the UCI.

Those riders who made the choice to stop using performance enhancing drugs, and to share their stories to enable the new generation of riders to learn from the mistakes that were made in the past, can continue to support clean cycling.

The role that training and education has to play in discouraging doping at all levels is well recognised by the UCI. The UCI will engage with any rider that is willing to work with them in the fight against doping and interested in establishing what lessons can be learned and applied to its ‘True Champion or Cheat?” programme which is obligatory for all riders subject to anti-doping tests.

This is not the first time cycling has reached a crossroads or that it has had to begin anew and to engage in the painful process of confronting its past. It will do so again with renewed vigor and purpose and its stakeholders and fans can be assured that it will find a new path forward.

That process extends beyond the UCI and the anti-doping agencies including WADA, USADA, AFLD and CONI must contribute to it by also examining how many times they tested Lance Armstrong and by providing their own explanation for why he never tested positive in the tests that they respectively conducted.

The UCI has tested Lance Armstrong 218 times. If Lance Armstrong was able to beat the system then the responsibility for addressing that rests not only with the UCI but also with WADA and all of the other anti-doping agencies who accepted the results.

The UCI supports WADA’s decision to create a working group to examine ‘The Ineffectiveness of the Fight Against Doping in Sport’ and proposes that it commence its work by examining the effectiveness of the system in place to detect the use of performance enhancing substances in cycling.

The UCI is committed to reviewing the environment upon which the sport operates in order to ensure that something like this never happens again. It has convened a special meeting of its Management Committee on Friday, October 26th to begin the process of examining the existing structures and introducing changes to safeguard the future of cycling.”