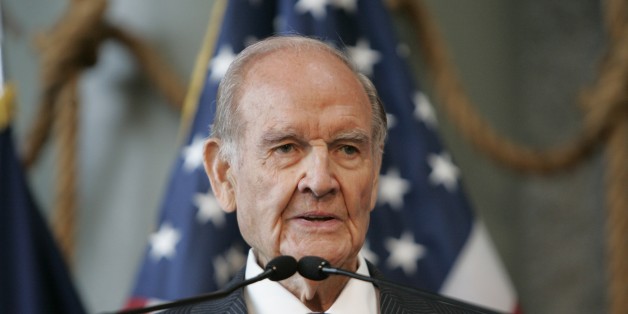 I was lucky enough to have a little adventure with former senator George McGovern at the 2008 Democratic Convention in Denver, Colorado. That was August 2008. I had seen him two months earliert in Los Angeles at the AFI Salute to Warren Beatty. Beatty had organized an all star fundraiser for McGovern in 1972, the first of its kind, in 1972 at Madison Square Garden. That landmark evening had reunited Simon and Garfunkel and Nichols and May. It may have also been the first time Barbra Streisand appeared for a candidate. At the AFI tribute, McGovern said a moving toast: “Richard Nixon would have been much better off if we’d been elected” in 1972.

The good senator passed away last night at age 90 after a short illness.
PS And just think what life would have been like if McGovern had beaten Nixon: out of Vietnam quickly, no two year national war over Watergate, no impeachment trial, no Gerald Ford, and maybe no Jimmy Carter.

It was around 6 p.m. Tuesday night when former Sen. George McGovern, the 1972 Democratic candidate for president and hero to many who grew up in that turbulent era, turned up at FOX News’ studios on the Pepsi Center campus.

Greta Van Susteren and I had just finished a Foxnews.com broadband show, and everyone was happy to see each other. But we did notice that McGovern did not have a credential hanging around his neck, which begged the question of how he’d gotten on the security-heavy campus in the first place.

“Howard Dean wrote me a letter about six weeks ago asking me to be his honored guest at the convention,” McGovern said. “I haven’t heard a word since then. I have no idea what to do next.”

Considering how completely disorganized this convention has been, this story did not come as much of a surprise. I rather doubt most of the people who attended this event will ever return to Denver unless kidnapped.

But I digress: We enlisted a golf cart and driver, and took the 86-year-old liberal movement hero over to the Pepsi Center. Once inside, finding Howard Dean wasn’t so easy. But with the help of an aide named Shannon who found convention director Stephanie Berg, we were on our way.

On the way to Dean, at least 50 different people stopped McGovern along the way asking for pictures or telling him a familiar story: “I got interested in politics because of you,” one woman said. “I was an 18-year-old delegate for you in 1972,” a man said. And so on. It was quite moving.

As we walked along, I told Sen. McGovern, whom I’d met before, that I probably became politicized because of him, also, walking around and knocking on doors in 1972. I was 15.

“Actually,” I said a few seconds later, “I was probably politicized first by Hubert Humphrey, in 1968. We wanted him to defeat Nixon so badly.”

McGovern laughed. “To tell you the truth, he politicized me too.”