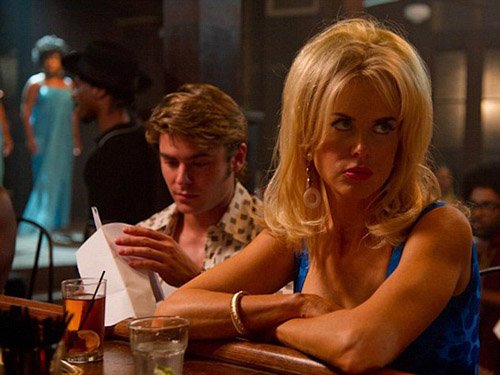 People are either going to love Lee Daniels’ “The Paperboy” or hate it. And yes, Nicole Kidman does urinate on Zac Efron, and she’s not even pissed off. (It’s to save him from jellyfish poisoning.) The film is the centerpiece of the New York Film Festival next week, and I cannot wait to see people’s reactions. Lee Daniels, who directed “Precious” to six Oscar nominations, has made a crazy, kookoo, brilliant film in which Kidman absolutely shines, Efron is filmed like an ingenue, Matthew McConnaughey does his best work ever, and John Cusack looks worse than anyone in any movie in recent history.

I really like “The Paperboy,” a Southern Gothic thriller based on a Pete Dexter novel (he co-wrote the screenplay with Daniels). It’s “Body Heat” on acid, basically. What happens? What doesn’t happen? There’s a murder, it has to be solved, there’s a reporter, his brother, and a crazy woman who’s courted the killer from outside prison. But “The Paperboy” is not about the plot. It’s about the characters, the pacing, the attitude, and the innards of a crocodile.

The story takes place circa 1972-72, hence the soundtrack that features Al Wilson’s mega hit “Show and Tell,” and lots of other good R&B. The movie is st in the Florida swamps, so everyone sweats through this film. There isn’t one forehead that isn’t shiny.

And into all of this comes the wild card: singer Macy Gray, who doesn’t sing, but just about steals the movie as a housekeeper for the wealthy father (Scott Glenn, always great to see him) of Efron and McConnaughey. Between this performance and her covers album this year, Macy Gray has really had a triumphant 2012. God bless her. She’s MoNique and Mariah Carey rolled into one in this film. But she also has found something no one knew she had. Bravo to Lee Daniels. He knows his girls.

Kidman plays Charlotte, who’s become the pen-pal lover of Cusack, the crazy jailed killer whom McConnaughey thinks he can extricate with new evidence. Hair teased up in extensions and dyed blonde, Kidman is decked out from the 60s. She plays it for all she’s worth–which is plenty. I am continually impressed that Kidman takes chances like this–whether it’s with Lars von Trier, or as Diane Arbus, or twirling around naked on stage. She’s the rare mixture of actress and movie star. And when she goes to the edge, it’s that much more fun. (More: many sexually provocative scenes with Kidman, including a “Basic Instinct” moment.) This is absolutely a best supporting nomination.

“The Paperboy” is wild stuff, and as much set in the 70s as it a movie that recalls movies of that decade. Maybe it doesn’t all work, but the majority of it does, and if you ‘get’ it, you’ll like you’re on the inside. It’s compelling and passionate, which is unusual these days. And if you’re a Zac Efron fan, you can watch him walk the line between really acting and being photographed like Betty Grable. (It’s a little unsettling.)