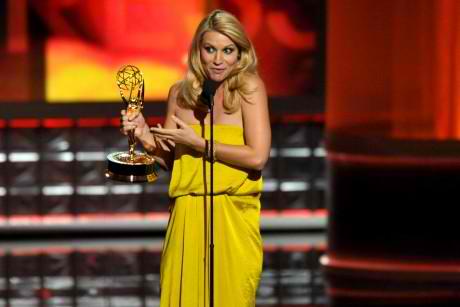 What an Emmy night: lots of upsets, starting with “Mad Men” getting nothing. I am starting a class action suit this morning. (Just kidding.) Showtime’s  upstart”Homeland” picked up Best Drama, Actor, Actress and a few other trinkets. Jon Hamm, who has never won an Emmy, went home empty handed.

John Slattery-who wasn’t even nominated this year after giving an award winning performance–still came to the Governor’s Ball and hung out with his pals Hamm. Christina Hendricks, Robert Morse, and Hamm’s lovely writer director actress girlfriend, Jennifer Westfeldt. Slattery, so brilliant as Roger Sterling, said: “Wanna know what’s funny? Guess where my wife (Talia Balsam) has been working for the last eight months? On Homeland!”

Jon Hamm was philosophical about the loss. Steve Carell never won an Emmy, neither did Ted Danson until the end of “Cheers.” Hamm is headed for Oscars, I think, anyway. I told Bryan Cranston of “Breaking Bad” he and Hamm should go beat the you know what out of winner Damian Lews. “Jon maybe, but not me,” said Bryan. He only plays a crystal meth dealer.

Hamm made it through the elegant Governor’s Ball despite the loss. “Mad Men” creator Matt Weiner quipped, “I guess I’ll have to write a better show.”

Best line of the night: nominee Julia Ormond, when asked if she’ll be back next season as Megan’s French mother. “My lips are sealed, which they were not in the show last season.” (Fans will get this.)

Jon Cryer– much deserved win for “Two and a Half Men” was “totally shocked. I really was. I had no speech.” After putting up with Charlie Sheen’s craziness for years, especially last year, this was a sweet victory. Show creator Chuck Lorre told me Miley Cyrus is coming in to tape a guest spot.

Over at HBO’s gigantic, splendid blow out of an after-show event: everyone from Jane Fonda and Mel Brooks to James Gandolfini, Christine Baranski, Julianne Moore, Nicole Kidman, Clive Owen, Kerry Washington, and so on. More about all that later this morning…

And Julia Louis Dreyfus created a record by winning Best Actress in a Comedy for “Veep.” She’s now won Best Actress three times in three different shows. The other two of course are “Seinfeld” and “The New Adventures of Old Christine.”