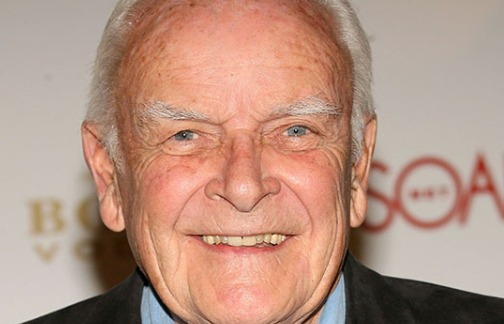 For many years, David Lewis played curmudgeonly corporate billionaire and patriarch Edward Quartermaine as a wily clown on “General Hospital”; he retired in the early 1990s. Edward was de-aged then and John Ingle, retired and popular acting teacher from Beverly Hills High School, took over. That was in 1994. Ingle passed away today at age 84, less than a week after his final appearance. In his last scene, Edward, who barely said a word, gave a thumbs up. We give a thumbs up to John Ingle.

You can laugh about the outrageous plots on soap operas, and the occasional brutal scene chewing. But John Ingle was the real deal. He took Lewis’s Edward and made him a little less clownish, and more conniving–but always with a wicked sense of humor. When the battling rich-as-sin Quartermaines were front and center on “General Hospital,” they were the heart of the show. They were funny, and not melodramatic. They were like a drawing room comedy, too sophisticated for soap shenanigans.

Ingle was tossed aside a few years by executive producer Jill Farren Phelps (the worst producer in the history of soaps, now positioned to do damage at The Young and the Restless.) He was replaced by a younger man. Ingle went to “Days of Our Lives,” but soon returned. The show flourished when he was on, he was antidote to the craziness around him. He will be sorely missed. And so will Edward Quartermaine. In less than a year, “General Hospital” will probably be replaced by someone chopping an eggplant.

Ingle, meantime, had quite a coterie of fans, and former students who became famous under his tutelage. Last week when he appeared on the show–he’d been AWOL a long time after his wife’s death–his fellow actors Tweeted that it was last episode. Thanks to YouTube, he will live on long after the eggplants have come and gone.