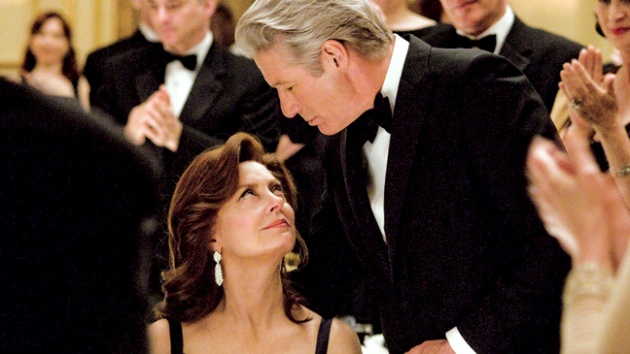 Richard Gere and Susan Sarandon used to live next to each other on the top floor of a very nice Greenwich Village apartment house. Sarandon and Tim Robbins were on one side; Gere was on the other in a kind of greenhouse. Now they co-star in Nick Jarecki’s very astute financial thriller, “Arbitrage,” opening Friday. Last night “Arbitrage” got its New York premiere at the Walter Reade Theater and then at the Monkey Bar, owned by Vanity Fair’s Graydon Carter. Carter hosted the party but he’s also in the film–and is pretty damn good as a mysterious businessman upon whose deal Gere’s character is depending to stay alive.

At the party: like, everyone. Gere, wife Carey Lowell, Sarandon, co-star Nate Parker. Bryant Gumbel congratulated Michael Strahan on his new gig with Kelly Ripa. Lainie Kazan was resplendent as usual. Tina Brown and Harry Evans made a rare appearance considering it was a Carter event–he succeeded her as editor of Vanity Fair. Chris Noth, Amy Irving, Gina Gershon, Ashley Banfield, Harry Belafonte, James Cramer, and Deborah Norville were among those in the audience.

Producer Laura Bickford’s been working on “Arbitrage” for some time, and it screened at Sundance. This labor of love is quite the accomplishment for first timer Jarecki, whose brother Andrew made “Capturing the Friedmans” and “All Good Things.” They’ve done a great job. And young Nick Jarecki even got a custom made suit out of it from Brioni, one of the night’s sponsors (along with Piaget and the Wall Street Journal).

Also at the screening: actress Kelly Rutherford from “Gossip Girl.” She’s going through an outrageous custody battle with her ex husband, who now has her two children–ages 5 and 3– in France. He can’t come to the US because his visa has been revoked, so she has to fly to France every two weeks to see them. This is the work of a judge in New York family court. Shameful! Who would separate small children from their mother? Luckily Alan Dershowitz is getting into the case now.