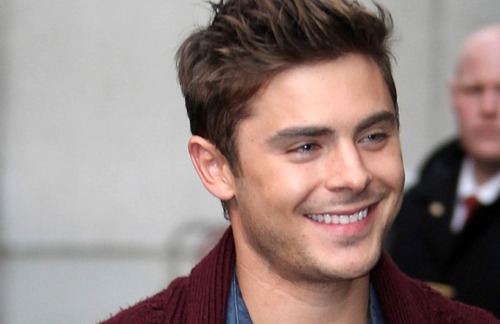 So: Zac Efron. At Sony Pictures Classics’ annual filmmakers dinner on Saturday night in Toronto, Zac Efron was the guy everyone wanted to meet. Of course, outside the Creme Brasserie restaurant on Cumberland Avenue, in a little alley, dozens and dozens of women, seemingly of all ages, crowded ten deep to get a glimpse of the former “High School Musical” star. Sitting on the inside of the barricades looking out, the whole thing looked like Beatlemania. (We were in a rain proof tent that is usually the restaurant’s outdoor dining area.)

Inside, Efron was a cool as a cucumber. He’s very nice, actually. And unfazed by all the attention. At first he said, “Maybe I should go out and sign a few things.” Before he could finish the sentence, everyone around us said “No” in unison. That seemed like a very bad idea, one that would cause an injury. Meantime, the ladies were shouting, waving, flashing cameras.

At one point, he took a call on his cell phone and walked into proximity of his rabid fans. I think he was milking it a little bit, but Zac said: “I couldn’t hear anything in there,” meaning the restaurant.

How does he process all of this, I asked him? “I know it’s not going to last forever,” he said quietly. “So I’m very grateful.”

He’s 24, and now he stars with Dennis Quaid in “At Any Price.” Remember when Dennis Quaid was the hot young guy from “The Big Easy”? Now he’s very happy just to watch all this unfold. Both he and Pierce Brosnan were eating in the back. They’ve seen it all.

So Zac lives by himself in the Hollywood Hills. He bought a house “but it’s not big enough for all the family and friends who come to visit,” he said. He is thinking of getting roommates because it is a little lonely. He’s talking to a couple of friends about it.

Had he seen his ex-girlfriend and “HSM” co-star Vanessa Hudgens in “Springbreakers” yet, I asked?

“I’ve heard about it,” he said, vaguely. And then he was gone, whisked out back by security. The girls outside in the front wouldn’t believe it. They were still hanging around, hoping in vain for something, anything.