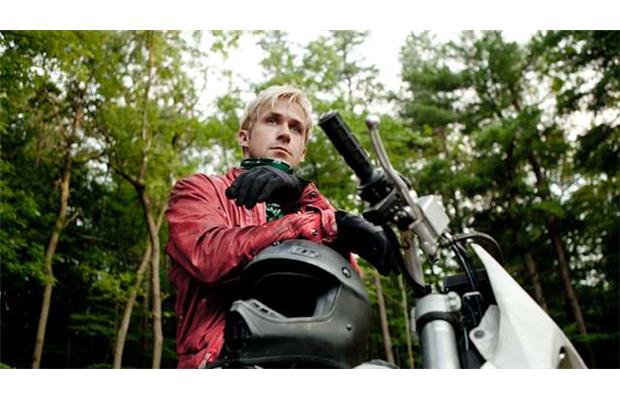 Ryan Gosling told me last night at the premiere of his new film, “The Place Beyond the Pines,” something we’ve probably all thought at one time or another: “I always wanted to ride motorcycles and rob banks.” And not to give anyone any ideas, Gosling, who does those things in “Pines,” added: “And it’s easier than you think. The banks are told to just give you the money.”

Indeed, watching Gosling knock off a bunch of rural banks in modern upstate New York with relative ease, you start to think, hey I could do that. But, again, kids, don’t try this at home.

“Pines” clocks in just under three hours and is its own kind of masterpiece. The second movie from Derek Cianfrance (“Blue Valentine”), “Pines has a unique construction. It’s multi generational and multi perspective. Ryan Gosling and Eva Mendes have the first hour or so, Bradley Cooper has the second hour, and the film finishes up with two young actors, with echoes of Gosling and Cooper.

Gosling plays a ex carnival motorcycle stuntman who discovers that a one night stand with Eva Mendes a year earlier has produced a baby boy. This sets off a series of episodes that spiral out of control. Gosling and Mendes–who became a couple in real life subsequently and still are going strong–generate a lot of heat as this never-was couple. Mendes is magnificent.

And then they are gone. Cianfrance takes a big chance and switches the story to that of a cop played by Bradley Cooper who pursues Gosling. It’s a gamble because the audience has followed this story with a huge investment. But Cooper is more than enough of an actor to meet the challenge. And so you have two of the biggest movie star-actor names as tentpoles for this unusual story as “Pines” changes perspective. Cooper’s path plays out from the consequences of his meeting Gosling, and still the story is of people whose lives spiral out of control from a single event.

There’s a third part to “Pines” too as the teenaged sons of Gosling’s and Cooper’s characters resolve the story. “Pines”– the title is the Indian translation of the word “Schenectady”–the upstate New York town where this was shot–is like a great novel that unfolds on screen in its own time.

Representatives from all the big distributors were present at this mayhem like premiere last night at the Princess of Wales Theater. Everyone wants it. Whoever gets it I hope will not try to force it into theatres for this Oscar season but give it a chance next spring. “Pines” could be a big, big deal. But it’s also a big, big meal of a movie.

As for Gosling, I asked him at the swell party following the screening — to which he naturally brought his family and where he and Mendes mingled with Kristin Wiig, co-star Cooper, and the stars’ endless admirers–what he thought of all the internet send ups of him, and his now-sort of invented way of saying “Hey girl” in movies. (I think his first acknowledgment of Mendes in “Pines” is actually the word Hey.)

Does it seem weird to him?

“How could it not?” Gosling laughed. “I know about it but you can’t think about it.” He shook his head. Fame and the internet are very strange companions. “The Place Beyond the Pines,” however, is a major film.