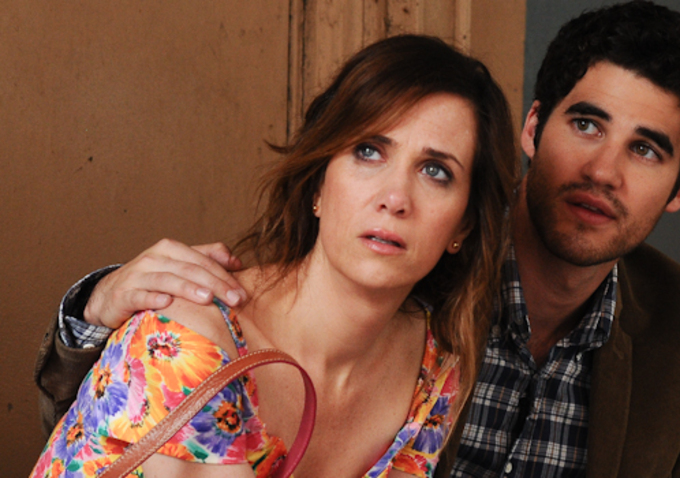 We’ll miss Krisren Wiig on “Saturday Night Live,” but after seeing her in “Imogene” yesterday, you know she’ll be juts fine. The very funny comedy– produced by Maven Pics, the new label from Trudie Styler and partner Celine Rattray– is a total hit.

The movie also a nice debut for Darren Criss, so popular from the TV show “Glee” that he caused a near riot outside the Ryerson Theater yesterday afternoon at the Toronto Film Festival. But Criss is also just fine in “Imogene,” and very ingratiating.

Of course, the standouts, as usual. are Annette Bening as Imogene’s casino-obsessed Atlantic City mom and Matt Dillon as her CIA operative live in boyfriend. You can tell these two are having a grand time chewing the scenery, although come on, Bening is too young to be Wiig’s mother, or vice versa. But a little suspended disbelief is not a bad thing.

Imogene is a typical Wiig character, although it’s based on the experiences of very funny screenwriter Michelle Morgan. Imogene is too smart, over educated good girl who’s parlayed her writing talents to a dead end. She’s survived by being hooked up with a Wall Street boyfriend, but now that’s run its course and she has no idea what to do with her life. That’s the serious part. Then the fun kicks in. And “Imogene” is full of laughs.

There are some nice supporting performances, too, from Broadway great Christopher Fitzgerald, Ronald Guttmann, Mickey Sumner, and the much  missed Natasha Lyonne. (She’s ready for a great sitcom.) Distributors were all over “Imogene” last night. After “Bridesmaids,” Wiig is hot, and this comedy should do fine.