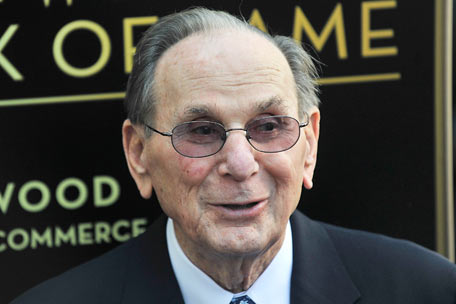 Hal David died today at 91. It’s a little heartbreaking for anyone lucky enough to have known him. He was a genius, and a gentle poet, a master lyricist whose hits with Burt Bacharach and others will live on forever, literally. I knew Hal through the Songwriters Hall of Fame, which he headed up for years as president until right after his 90th birthday. He never missed a meeting in New York or anywhere else. He was so devoted to young songwriters that the Starlight Award was renamed in his honor so that Alicia Keys, John Legend, Drake, NeYo and others would benefit and be encouraged by his enormous legacy.

Aside from his family and Burt Bacharach, the person I immediately thought of tonight was Dionne Warwick. What a year: she lost cousin Whitney Houston in February, and now Hal. Dionne’s work with Bacharach and David is indeed legendary, producing dozens of hits that are staples of the American songbook. And while occasionally other artists like Aretha Franklin or Dusty Springfield would cover Dionne’s B-D hits, it was always Dionne’s version that was the standard.

Hal’s poignant, brilliant lyrics were brought to life by Dionne, who could never sold those hits unless there was substance to their poetry. Showstoppers like “A House is Not a Home” and “Walk on By” were hummable because of Burt. But they were memorable because of Hal. He did what no one does now, and few did in the past: create stories within the rhymes. You can identify with the songs because of the words in them, and the notions that are expressed. When Dionne sings “Don’t Make Me Over,” at first she sounds scared someone will, then sounds a warning if they do. Amazing.

Burt Bacharach, who is just as great, was always flashier. He had celebrity marriages and sought the spotlight. Hal was a quiet guy, introspective, and mild mannered. At the Songwriters Hall of Fame, which he and Linda Moran rebuilt a decade ago, he was a leader par excellence. He loved the new stars who were real songwriters, and wasn’t afraid to voice his opinion about contemporary music. He was succeeded last year as president by a younger version of himself, Jimmy Webb. But he will never be forgotten, and will always be celebrated about ten times a day on the radio at least.

And remember, a house is not a home, but a record is not a song without great lyrics.