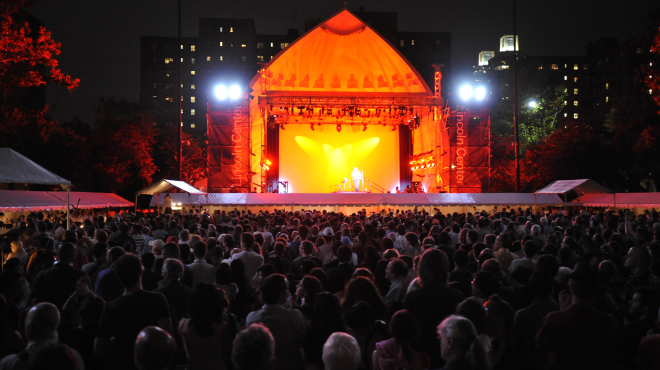 The Apollo Theater had a very high priced exclusive fundraiser in the Hamptons on Saturday night. But actual R&B players with long histories at the Apollo Theater took over Lincoln Center’s wonderful out doors shows this weekend. While someone named Leah Labelle (real name Vladowski)  sang in the Hamptons, the actual members of Labelle–Sarah Dash and Nona Hendryx–joined Melba Moore, Desmond Child and Rouge, and Melissa Manchester for a sensational tribute to the late Laura Nyro on Saturday night.

Also making his debut on stage, Nyro’s son, Gil Bianchini. Nyro’s brother, Jan Nigro, also performed. Hearing songs like “Stoned Soul Picnic,” “Wedding Bell Blues,” and “Save the Country” with a live, full band that included legends like Felix Caviliere of the Rascals, songwriter Toni Wine, and Bernard Purdee on drums was icing on the cake. Steve van Zandt’s lovely wife Maureen brought friends and family to cheer the group on from the VIP tent.

When the Nyro show was over, a triumvirate including Stax original William Bell, Hi Records legend Teenie Hodges, and famed songwriter Dan Penn took the stage. The sound of Memphis soul wafted out over the 1000 or more listeners at the free show. They covered some of Al Green’s hits, and Bell helped out while Penn played “Dark End of the Street” and “I’m Your Puppet.” Otis Clay followed with a gritty set of Southern soul including his big hit “Nickel and a Nail.” He ended the evening with “Love and Happiness.” calling Bell and Hodges back on stage “just like we used to do it at the Apollo.” Ain’t nothing like the real thing, you know.

And on that note: on Friday night, Valerie Simpson, wrote “Ain’t Nothing Like the Real Thing” with late husband Nick Ashford, saluted her beloved partner with a standing ovation show. Featured were many of Ashford and Simpson’s hits and a bit of Valerie’s surprise solo album, “Dinosaurs Are Coming Back Again,” which can be heard on iTunes and Amazon.com. Simpson brought many of her artists from the Sugar Bar and they finished the night with a rousing jam on “Ain’t No Mountain High Enough.”

The shows, thanks to Lincoln Center, their sponsors, including Time Out New York, and Bill Bragin, were free. Authentic soul. There’s nothing like it.