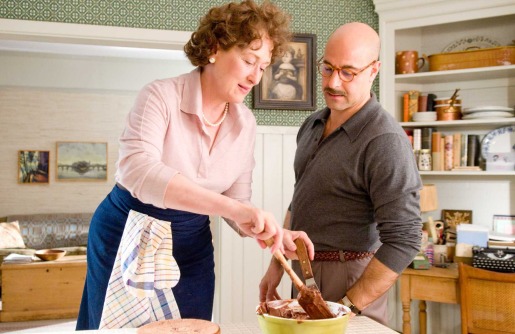 Meryl Streep showed up at the Apple store in Soho this afternoon for a Q&A to promote “Hope Springs” wearing a big white bandage on her left hand. While cutting through an avocado she sliced open her hand, doing quite quite a bit of damage. A local doctor in Connecticut sewed it up but then Streep headed back into New York for hand surgery. “They gave me an even bigger bandage,” she told me after the Q&A, which also included co-stars Tommy Lee Jones and Steve Carell, and director David Frankel. “And of course I took it right off when I got home. But now,” she said, eyeing her unstable hand warily, “I think I’ll put it back on.” So she is not Julia Child, whom she played so vividly in “Julie and Julia.” Never try your stunts at home!

Streep and co. open in “Hope Springs” on Friday. They’re trying to sell it as a comedy. Let’s say it’s a serious comedy. I’m not sure if Sony knows what it has. I think “Hope Springs” is sort of wonderful, unexpected, and very difficult to sell. This is an Oscar movie in August. This trio of actors is quite sensational. “Can you believe I waited so long to work with him?” Streep asked me rhetorically about Jones. She shook her head. “He’s the go to guy on set. Everyone loves him. I took two 22 year old boys to a screening last week, and they really related to him. Everyone relates to him.”

Everyone relates to Meryl. A ten year old boy in the audience at the Apple store raised his hand, asked a question, and asked for an autograph. Jones, from the stage, said, “Of course.” But it was Meryl, in the green room, after the Q&A, who put it together. She opened a leather stationery kit from her handbag, neatly tore a piece of paper in half, and inscribed it for the boy. “I have to do this,” she said.

The people in the audience were from all over; the girls who sat behind me came from South Africa. There were a lot of acting students. Rolling Stone’s Peter Travers moderated the panel, and noted that it was Steve Carell’ s 17th wedding anniversary. His wife, Nancy, was not with him. He’d been doing press all day. Carell, by the way, has stopped dyeing his hair jet black. He’s salt and pepper. No more Michael Scott. And in “Hope Springs,” he plays it straight as a marriage counselor. We never learn anything about his Dr. Feld. What’s his back story, I asked Steve? “I don’t want to know,” he said with a laugh. Meryl added: “At least we know he’s successful. He charges $4000 for a week!”

“Hope Springs” is relatively low budget, shot on video–Streep’s first movie not shot on film. Someone in the audience asked about all her characters she’s played, and we talked about it backstage. Her creation of Kay Soames, an invented fictional character, is riveting. “I like to think they’re all me,” she said, thinking of Margaret Thatcher, and the nun from “Doubt” and Sophie, and the tigress magazine editor from “The Devil Wears Prada” and so on. But how did she capture this woman? “I have a lot of relatives from the Mid West,” she said. “Not that she’s based on one of them.” She’s based on all of them.

More from the Apple event–and the video of the event will be up by Tuesday on iTunes for free. Meantime, Apple owes me a commission. I convinced an older couple from Ft. Lauderdale to upgrade their iPad to 3G. Can’t live without 3G!