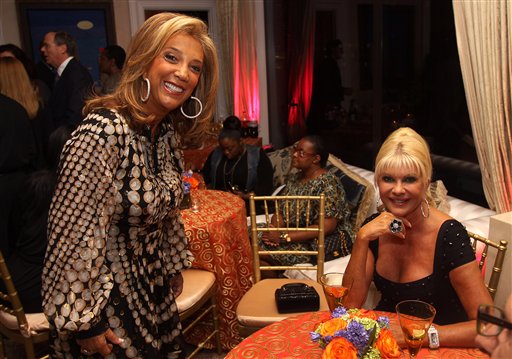 Denise Rich is gone. Denise, what a time we had! Denise has gone to “Europe,” a vaguely mystical place. She’s a woman of the world now. She will carry an Austrian passport even though she was born in Worcester, Massachusetts. I will miss her. Despite Denise’s strange adventure with Bill Clinton, the pardon, and her ex husband Marc–who can only return to the U.S. if he pays back taxes totaling more than $100 million–she became a popular, fun figure. No kidding. She has dimples, a hearty laugh and a sweet nature.

In the mid 90s, Denise wrote a song called “New York, I Love You.” Bobby Zarem pushed it every single day in the NY Post in Neal Travis’s column. Denise also started writing songs with lots songwriters, became friendly with Clive Davis, opened a little record  label. She also started her foundation for cancer research and raised a lot of money. That money is credited with funding a lot of successful projects including the drug Gleevec at Novartis.

Denise is being called a tax evader in the press. I don’t know. If that was her intention, she learned from the best. Marc Rich is the enemy of the people. He left the U.S. in a tax dispute, became a federal felon, bribed his way to a pardon, and still remains aloof, elusive, rich as hell, and completely above all world laws. He also for years operated his company Novarco from White Plains, New York. A decade ago I wrote extensively about how he’d made monkeys of all of us, and how the government- Democrat and Republican–had looked the other way. Business just went on and on. It was only when he feared that Paul O’Neill, an enemy, would become Secretary of the Treasury under George W. Bush, that he aggressively sought out his pardon. And Bill Clinton gave it to him.

What about Denise? Let’s give her a break. Her kids are in Europe. Her boyfriend is, too. She lives between Cannes and Vienna, and St. Tropez. She has a big yacht and lots of homes and hundreds of millions of dollars. Next week in St. Tropez she’ll still give her annual part on her yacht, Lady Joy. And her Angel Ball in New York and the cancer fundraising will still go on. But Denise Rich as a regular New York celebrity is over. The triplex apartment on Fifth Avenue and 60th St. is for sale, for $65 million. All the art work and the furniture is being packed up. It’s sad to say goodbye.

Here’s a picture of Denise with Ivana Trump. You know, I think the Nineties may be over.