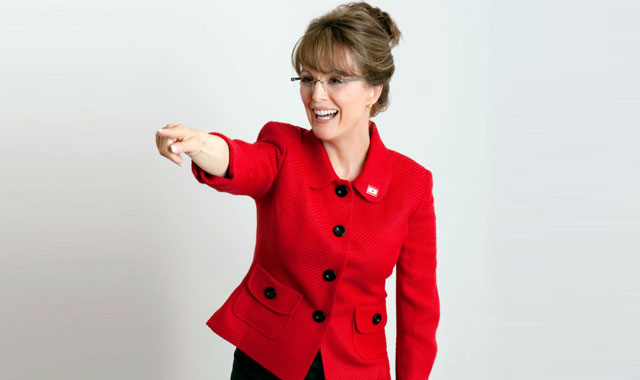 The week went by so fast, but the highlight in L.A. was the Critics Choice Television Awards, presented by Broadcast Television Journalists Association. Our LEAH SYDNEY reports that when Julianne Moore won Best Actress in a Movie or Mini Series for playing Sarah Palin in “Game Change” she had a great acceptance speech. Julianne said:  “You can’t give a great performance without a great story. So I thank the Republican Party for fostering such a truly amazing American Story.”

The big story of the night was the win for “Homeland” as Best Drama and “Community” for Best Comedy. Will these choices cross over to the Emmys? I doubt it. “Mad Men” is still the Best Drama. But “Community” could turn out to be the surprise.

There were plenty of celebs at the Beverly Hilton for the awards. Judd Apatow came for HBO’s “Girls” and brought his 14 year old daughter, Maude, with him. (Her mother of course is Leslie Mann.) In Apatow’s new movie, “This is 40?” Maude plays the daughter of Mann and Paul Rudd. It’s the sort-of sequel to “Knocked Up,” a very funny movie.

What does he think of the state of comedy in show business now?

“It’s a great moment in comedy in Hollywood now,” Apatow said.  “It’s the Golden Age of Comedy now in my mind.  So many amazing things happening in Film and TV. It’s blowing my mind on a daily basis. I’m really loving what I’m seeing now.”

Don Cheadle told me about his current job starring on Showtime’s hit “House Of Lies.”   Don told me, “The dialogue is so quick.  We have great writers and we improvise too. I love having a TV gig like this. ”

Jimmy Kimmel, who later lost to his pal Jimmy Fallon for Best Talk Show, told me that “I love being here. It’s the first time in ten years I’ve gone to an award show that I’m not hosting or presenting.  I’m just going to have a good time. ”

The night was fast and funny.  Presenters were typically  irreverent. “New Girl”‘s Zooey Deschanel and “Glee’s” Chris Colfer got wrapped up in tablecloths because Zooey thought, “the critics won’t like my dress. ” They proceeded to kowtow to the critics throughout.  Must have worked because Zooey later won!  She tied with Amy Poehler for Best Actress in a Comedy Series.

Cloris Leachman, 86 and getting younger, scored the biggest laughs of the night.  As she presented for Best Talk Show, she recited without missing a beat, every talk show she had been on since the beginning of her storied career.

I also caught up with “Breaking Bad’s” terrific Giancarlo Esposito who was named Best Supporting Actor in a Drama Series. Giancarlo told me, ” It’s nice when especially the Broadcast Critics Association regards your work because they see everything. They know the good and the bad, and what could be and what didn’t make it. This is like silver and gold wrapped up in a polished diamond.”

After the event I spoke with BFCA President Joey Berlin who told me, “The whole thing has grown so expediently over the last year and the future looks even brighter. We couldn’t be more thrilled. It’s just an industry thing, so we have talent, executives and show runners.  It’s a real inside look on the business.  We take it very seriously. It’s a great night.”