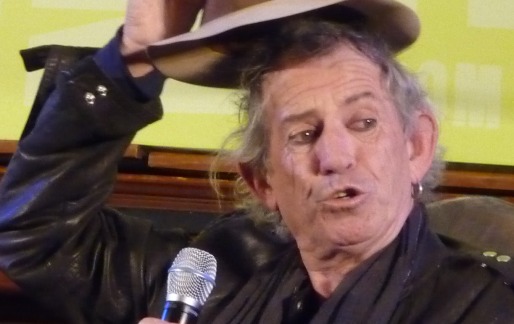 Exclusive from April 4, 2012: Everyone’s been wondering what Rolling Stone Keith Richards would do this year–a new Rolling Stones record? Nope. He’s just finished producing a new doo wop album for Aaron Neville on Blue Note Records. Don Was, who’s running A&R at Blue Note Records. “Keith had a great time,” says a source, making the album with the sweet toned New Orleans tenor. Neville is also a master chef, but no word yet on whether he cooked for Keith and Don.

Richards is otherwise engaged in preparing for the Rolling Stones’ 50th anniversary coming in 2013. A big documentary is scheduled to launch later this year directed by Brett Morgen (“The Kid Stays in the Picture”).

And the news is that Taschen Books is preparing a mega volume of Stones photographs set for a January release. You know Taschen–their books have to be read on pedestals because they’re oversized and magnificent. The Taschen editors have gone through every known archive, I’m told.

The Stones are also scheduled for some kind of greatest hits set for January, although what exactly what form it will take has yet to be determined.

In the meantime. the Stones’ bootleg series on Google is booming. Just released is the 1975 show from the LA Forum at http://tinyurl.com/cst65ph. There are three volumes of bootlegs, all downloadable for $4.99, with one free track per set and links to video interviews with Mick Jagger and Keith Richards from 1973. And yes, I am told that at least Keith is aware of the Stones’ inclusion on “Mad Men” last Sunday.