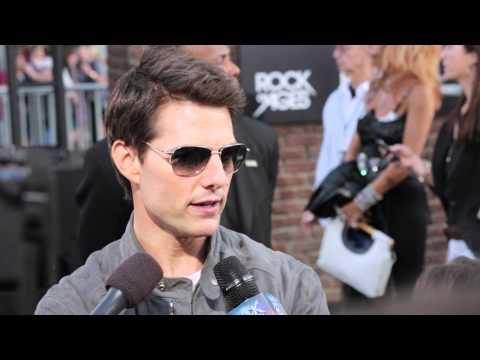 The worst celebrity tribute I ever went to was the American Museum of the Moving Image’s salute to Tom Cruise. Generally, these “roasts” are funny–not raunchy–but full of fun and personal recollections from the speakers. That Tom Cruise event was notable for the lack of “inside” stories. It was held on February 10, 2007.

Neither of Cruise’s co-stars from “Lions for Lambs,” his movie of that moment, showed up. The people who did speak looked they’d been blackmailed into coming. No one had a good joke or anecdote about Cruise. The diminutive actor spoke right from the scripted heart about his love of making movies.

So tonight’s Friars’ dinner– a pr stunt to promote “Rock of Ages”–promises to be a lot of , er, fun. A source inside the production says that participants have been told explicitly that this is not a roast. No mention, please, of Scientology, ex wives, baby Suri’s fashion sense, or anything else that could be construed as “personal.”

As with the Museum of the Moving Image dinner, there should be a heavy presence of glassy eyed mystery people who are there to cheer on their leader. And press will mostly be on the red carpet. As little inside the Waldorf Astoria as possible.What will come out of this episode? One scripted moment–with Matt Lauer or someone else–that makes Tom look like a cool guy. Don’t stop believin’.

And “Rock of Ages”? This morning it’s got a very low 25% rating on rottentomatoes.com. Both of the Hollywood trade papers gave it a thumbs down. Cruise–who’s an excellent mimic–seems like he’s channeling Ben Stiller as “Zoolander.” The production says he’s modeled after Axl Rose, but it’s Bret Michaels, dead on down to the bandana.

Can’t wait for the transcript of Cruise’s “I grew up loving movies” speech. I doubt Gilbert Gottfried will be allowed anywhere near this Friars dinner. And the advertised guest list is really, truly weird, like an episode of the “Joe Franklin Show”: Alec Baldwin is hosting, Sharon Jones and the Dap Kings will perform, which is nice. But Broadway’s Megan Hilty? “Rock of Ages” choreographer Mia Michaels? Cabaret musician Loston Harris? Brazilian singer Bebel Gilberto? Former one hit wonder Corinne Bailey Rae? What? And or course, naturally, Holocaust survivor and writer Elie Wiesel.

The Yankees play the Braves tonight at 7pm.

PS Cruise is the only actor in the big Paramount 100 anniversary photo who is almost completely expressionless. He doesn’t even crack a smile. http://www.vanityfair.com/hollywood/2012/07/paramount-pictures-100th-anniversary-photo