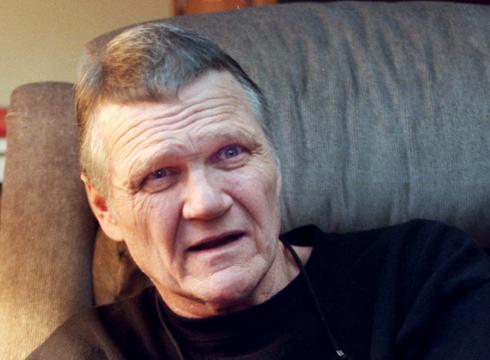 You’re going to think I am crazy. The other day I was reading Bert Sugar’s obit in the New York Times and a thought flashed in my head. It was because Bert was all about boxing, and I always think of Harry Crews, the great Southern Gothic novelist when I think about boxing. And I actually thought: Harry Crews is next.I don’t know why I thought that, except that Harry–whom I had not talked to in years– was a severe alcoholic who lived a life very hard on himself. I knew he was 20 years or more older than when I’d edited him at Fame magazine, during our short but happy friendship. But I got a feeling, a vibe, something was wrong. And I dismissed it. So now I read that Harry died on Thursday at 76 down in Gainesville, where I left him in 1991. I’m so disappointed that I was right.

Harry–despite being very famous and revered– wrote two pieces for me at Fame. One of them was on Sean Penn. It was excellent. I can’t recall the other. I do know that I sent him to Louisiana in 1990 to interview Walker Percy. He kind of disappeared. It took a while to find him. One day when I called his house in Gainesville, he answered the phone. He said, “Grrr Mmmm uhhhhh.” I said, “Harry, I don’t know what are you saying. Did you see Walker Percy? How did it go? He mumbled something and put a friend on the phone. The friend said, “He went and it was very bad. They started drinking. Harry fell off the wagon. He’s back but he’s a mess.” There was no piece. Walker Percy’s person at the time yelled at me, as I recall, which was bad because I revered Percy and had looked forward to this coup. Oh well. Apparently they spent a spell just drinking til they were blind drunk and got nothing done.

(Addendum: I do remember meeting Harry in 1989 in Louisville for the Humana Festival. They commissioned him to write a play, which was staged. It was very good, but he was not comfortable with it. He walked out of the performance. You could see that he was suffering, watching the actors speak his lines.)

I’m so sorry he’s gone, and that not more people know about him. He was a tortured geius. His memoir, “A Childhood,” is just a must read. “The Knockout Artist,” “The Gospel Singer”– there are many novels, they are all worth reading. In my head I think of him with Barry Hannah, who is also gone. And Walker Percy. But Harry was grittier and closer to the bone. If it weren’t 12:25 am, I’d go look for a letter he wrote me in 1990 saying I was the greatest editor he’d ever had. I was flabbergasted, but he probably wrote to that to all his editors. He was an American original, really important, and from the time we worked together a magnificent friend who I was probably too young to appreciate properly. I just pray he’s being read in Southern Lit classes, and that his importance grows and grows.

Now he’s with so many writers I knew, hung out with and learned from, I hope they’re all together, cooking, fishing, dreaming, drinking: Laurie Colwin, Kurt Vonnegut, Pierre Franey, William Wharton, the magician Harry Blackstone, Jr., David Halberstam, Spalding Gray, Julia Phillips, Robert Parker, and the hilarious Peter Ustinov among them. They made such a difference in my young life.