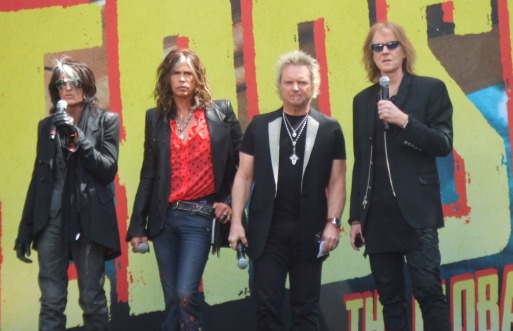 Only in jaded LA would a major rock band hold a press conference during the day at a mall while shoppers and soccer moms did their thing. That’s exactly what Aerosmith did today at The Grove Mall, talking about their 2012 Global Warming North American Tour and forthcoming album to the press and numerous adoring fans. The 18-city trek will begin in Minneapolis on June 16. Cheap Trick will be their opening act. Additional dates will be announced later. Jimmy Kimmel introduced the band (minus guitarist Brad Whitford). LEAH SYDNEY reports from the city where no one presses the gas pedal when the light turns green. (They’re eating, talking, throwing the I Ching, whatever.)

“Aerosmith are literally walking this way,” said Kimmel. Steven Tyler wore a sparkling half buttoned polka dot red shirt and sequined jeans. He said that the band’s 15th studio album, their first in eight years, is almost finished and should be released in roughly three months.  “We’ve been underground for four months,” said Tyler, “doing what we do best. We got two more songs to finish before mixing.”  Some of the new song titles are “Legendary Child’ “Beautiful” and “Out Go the Lights.” Tyler spoke about this year being the band’s 40th birthday and the band’s sometimes contentious history. “Everything you’ve ever read, plus a lot of inside family stuff. Our kids grew up together. We fight all the time.”

Sony Music must be very happy.

When bandmate Joe Perry was asked about the benefits of Tyler being on “American Idol,” Perry quipped, “He gives us free sunglasses.”  Perry then went on to say, “It’s getting warm, it’s going to get hotter. We’re going to actually play some songs off our new record for our fans, along with the old good ones. So we can’t wait to bring this thing home.” Tyler then added, “We’ve been setting fires and putting them out whole career. We like to light fires under peoples’ asses. What better title than ‘Global Warming,’ right? Everyone’s been dancing around the tribal fires of rock and roll forever.” Then in true rock star fashion, Tyler said sincerely, “We will not let you down.”  With that he dramatically walked off the stage. And, luckily, did not fall.

Meantime in the LA Music scene, LEAH reports on our old pal Carole Bayer Sager, one of the great pop songwriters of the last 30 years.

Manhattan native Carole told the story of how she was just fifteen when she first started writing songs.  She later had a brief stint as a speech teacher, which she loved, while she was teaching she received a $35,000 check from a B-side of a Monkees record.  Carole knew then this was her calling and went back into song 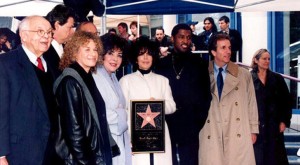 She playfully told a story of how annoyed she would get by Burt’s legendary obsessive perfectionism, acknowledging that, “Burt is one of kind.  A true genius.”  Burt himself was honored along with Hal David the night before at the Museum. Clive Davis and Dionne Warwick, each still mourning Whitney Houston’s death, attended.

PS Carole’s hits: include “Don’t Cry Out Loud,” “When I Need Love,” “That’s What Friends Are For,” “The Theme from “Arthur,” just a few dozen major hits.