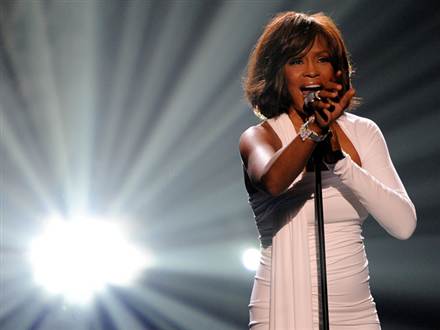 EXCLUSIVE Ricky Minor, Whitney Houston’s longtime musical director, tells me that he met with her on Thursday morning here at the Beverly Hilton Hotel. “She’d just been swimming. It was before 9am. She loves to swim. She had wet hair and she was getting it all over me.” Minor was getting ready to rehearse Brandy and Monica for a medley of Supremes songs for Clive Davis’s dinner–being held now, only three hours after Whitney’s tragic death. “She stayed, gave the girls advice. She was singing along from the theater. She said, Can I have a mike? And I said No, this is their show,” Minor said, remembering that he was joking. He is in shock he says. While we spoke, another member of the Davis team came along and said “I spoke to her yesterday. She was fine.” Minor tells me Whitney showed him her athletic arms from swimming, and was “very proud” of her athletic condition. “She said she was very excited about producing Sparkle and wanted to produce more films. It’s unbelievable.”