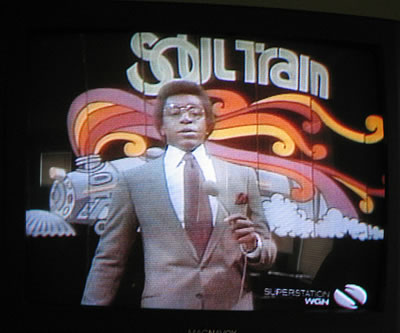 It seems that Don Cornelius has committed suicide at age 75. I didn’t really know him, but saw him often at record industry gatherings. He was a little aloof, and in recent years he seemed more distant than ever. None of this matters. Here’s the story: Don Cornelius started “Soul Train” as the black “American Bandstand” in the 1970s. The theme music was performed by MFSB called “The Sound of Philadelphia,” which became a huge instrumental hit. “Soul Train” was often broadcast in the afternoons on Saturdays at odd times and on odd stations. It didn’t matter. What Don Cornelius did was incalculable. He brought black music to television when no one else would, or couldn’t.

This is not to say that “American Bandstand” didn’t do it, also. Dick Clark was color blind. But “Soul Train” was the “inside”– the groups we heard on WBLS in New York had faces on “Soul Train.” So what if they lip-synched? “Soul Train” was all about getting the music to the people. For a white kid in New York, this was the coolest. And not just Motown performers, whom were already assimilated. On “Soul Train” you got The Whispers, The Dells, Joe Tex, The Chi Lites, all the Philly International acts, Tavares, Tina Turner (with Ike, long before her “liberation”). The first episode– October 2, 1971– featured Gladys Knight and the Pips, Eddie Kendricks, the beloved Honey Cone (“Want Ads,” “One Monkey Don’t Stop No Show”), and then came Al Green, Bill Withers, Jean Knight (“Mr. Big Stuff”), and the Chairmen of the Board (“Give Me Just a A Little More Time”) and so on. Al Wilson sang “Show and Tell,” but I can’t show it to you on YouTube because of some stupid copyright thing. Look for it.

Don Cornelius, a sharp dressed handsome man, was married in 1956 and had two sons. He remarried in 2001 to a woman whom he divorced in 2009. He told the judge had to get divorced fast because he was going to die. Did he suffer from chronic depression? Was it something else? I don’t know. I just know that I ower him a lot, and I’m only getting to thank him now, when it’s too late. He brought the Cashbox R&B charts alive for me, and inspired me to make my film, “Only the Strong Survive,” in 2002, when I sensed our time, his time, was coming to an end. Thanks for everything, Don. You’re in my Hall of Fame.]

UPDATE from Aretha Franklin: “It’s just so sad, stunning and downright shocking and a huge and momentous loss to the African-American community and the world at large.  Don Cornelius single handedly brought about a melding and unity of brother and sisterhood among young adults worldwide and globally with the unforgettable creation of Soul Train.”