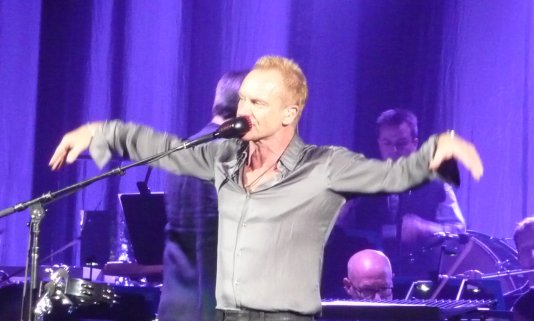 Hugh Jackman opens tonight on Broadway, doing his song and dance routine with wild enthusiasm and endless vigor. Did he get tips from rock star Sting? You betcha. In the Playbill for the show, Jackman makes sure to add: “Special thanks to Sting, too!” Of course Jackman is a mere 43. Sting just turned 60. Last night, though, Sting was like a man (a man in very good shape) of 33 as he rocked the Roseland Ballroom for the second night in a row. Sting’s “Back to Bass” show reclaims his rock star status with a thoroughly punchy punk performance that includes his big hits and some gems that he recovered– from older albums –like the songs “Sacred Love” and “Inside.” It’s the amazing breadth and depth of Sting’s solo catalog that it keeps being reworked either in symphonic form or in renewed rock. The Roseland audience–which included actors Joe Mantello and Fisher Stevens– was loud, loud, loud all night singing along with all the lyrics. The massive space was also quite literally sold out to the rafters. Sting returns tonight to Washington  DC’s Constitution Hall, and then heads west for more sold out shows. His box set, “25 Years,” is a stunning music gift this Christmas. The single best of CD culled from the box is a bestseller.