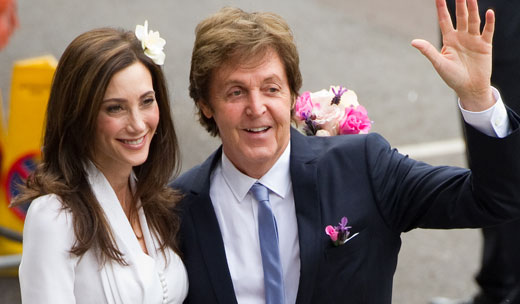 Paul McCartney and Nancy Shevell had an all star wedding reception party for rockers last night at the Bowery Hotel. Yoko Ono and son Sean Lennon were there, as well as Elvis Costello, Martin Scorsese, Ron Delsener, Billy Joel, Jon Bon Jovi, Keith Richards and Patti Hansen, “Little” Steven van Zandt, and James Taylor, David Geffen, plus actor Steve Buscemi were among the guests, as well as Mayor Mike Bloomberg. The latter must be a Beatles fan, as he usually spends his weekends in Bermuda. Barbara Walters, a distant cousin of Shevell, was a guest as well. Others who made the cut included designer Ralph Lauren with his wife Ricki, their son David his wife Lauren Bush Lauren, plus the Foo Fighters’ Dave Grohl, and Joe Walsh of the Eagles and Rosanna Scotto of Fox5. All of Paul’s kids were there. James McCartney made a beautiful toast, according to sources. So did Nancy’s son, Arlen. “It was low key and had a real family feel, too.” Music was supplied by a deejay. The party ran from 8pm past 1am.

The only big local rock star who wasn’t there was Sting, who had a show in Boston.

Many of the guests probably ate early or looked for late night cheeseburgers following the party. That’s because all Paul McCartney events are strictly vegetarian.

McCartney, as I revealed earlier, has recorded a new album of standards and new songs with producer Tommy LiPuma and Diana Krall. It’s set for a spring release.

Earlier that evening, van Zandt celebrated the 500th broadcast of his “Underground Garage” radio show at the Hard Rock Cafe, with Buscemi as a guest, as well as Darlene Love, Jesse Malin, and Debbie Harry. None of them performed, but Garland Jeffreys did two songs from his new album, “The King of In Between,” which is going into the pre-nomination Grammy voting in the Best Rock Album category. The members of Green Day also came for a brief interview, then took over the small green room in the back with their obnoxious body guards.