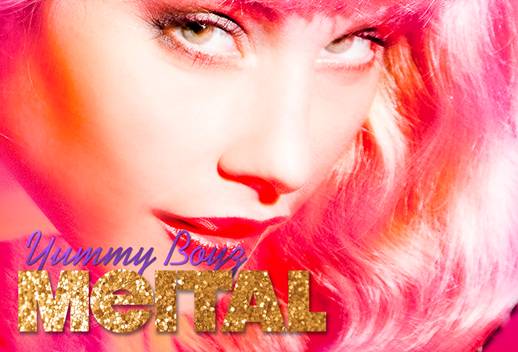 Meital Dohan— you may have seen her sexy scenes on “Weeds.” Tonight she gives her first ever live performance of sexy debut single “Yummy Boyz,” at midnight, on October 21, at Club Eleven’s weekly “Fresh Friday” party in West Hollywood. In anticipation of Meital’s debut “Yummy Boyz” performance at the Grindr party, this sassy songstress is giving away a free download of the exclusive “Yummy Boyz” Chew Fu Grindr Remix on her website www.meitaldohan.com/grindr. The free download launched on October 6 and is available for one month only. Additionally on select dates leading up to the event, Grindr will also be sending a live stream with a free download of the “Yummy Boyz” Chew Fu Grindr Remix to its million plus members worldwide.

Meital’s debut live show of “Yummy Boyz” will definitely be a show to remember. Merging sexy and clever with a bit of humor, Meital will captivate the audience with a building montage of climaxing visuals, her over the top wardrobe (or lack thereof!) and a finale that will absolutely blow your mind!

Most recently, Meital posted her latest webisode “Meital’s Fitness Wisdom” on her YouTube Channel and it quickly became the #23 top rated video of the week of September 19 and has over 250,000 views to date. This hilarious and sexified video will give you a little sweet taste of what to expect in her upcoming, debut performance of “Yummy Boyz.”

Meital’s single “Yummy Boyz” and 6 remixes by some of the hottest mixers including Chew Fu, Danny Verde, Dark Intensity and Electrolightz are available now on iTunes.

Director/Producer McG chatting with Cambio’s Nathan Coyle at the premiere of their new online series “Aim High” at Trousdale in Beverly Hills.

Jon Lovitz, cracking up photographer Michael Caulfield, who was among those honored  at the Roosevelt Hotel in Hollywood at the opening event for the Beverly Hills Film, TV &  New Media Festival.

Directors Phillip Noyce and David Cronenberg in a confab at Cronenberg’s premiere of his fantastic new film, “A Dangerous Method,” at the Academy in Beverly Hills.

At the American Express Platinum Card Lunch at Bouchon in Beverly Hills, Michael Chow, owner of Mr. Chow’s, eating lunch himself right next to the private room where the event took place.

Soap star Mary Beth Evans, who’s currently starring in “Murder at the Howard Johnson’s,” with co-stars Patrick Munoz and John Coppola, greeting some of her “Days of our Lives” castmates there to cheer her on, along at the Studio C Artists performing space  along Theatre Row in Hollywood.