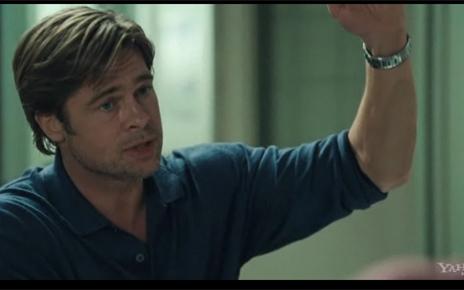 Once upon a time, a long time ago, Brad Pitt had an Oscar nomination with “ Twelve Monkeys.” (I lost nine along the way!) It seemed like a turning point for the new generation Robert Redford. And then, nothing. Sometimes Pitt was very interesting in a film and not taken seriously. (“Devil’s Own,” “Sleepers,” “Burn After Reading”). Other times, he wasn’t so great — think “Troy.” But maybe it was because the movies weren’t so good. Now with Bennett Miller’s “Moneyball,” Brad is going to get his Oscar nomination and maybe even win. He is note for note perfect as Oakland A’s manager Billy Bean, creating a whole character of such dimension and depth that he surprised maybe even himself.

“Moneyball” is all about how Bean came to be convinced to use something called ‘sabremetrics’–a numbers theory developed by Bill James in the late 70s–to guide his team to victory. In 2002, the A’s–with the lowest salary budget in the major leagues–won a record 20 games in a row. Bean became an overnight genius, and wound up turning down an offer from the Red Sox to become the highest paid general manager in history. The Sox went on to win the World Series, using James as a highly regarded consultant.

Full disclosure: in 1983, I was Bill James’ book publicist for his “Baseball Abstract.” The book became a bestseller, and Bill went on to much success and controversy in the baseball world. He was a genius before his time, and now–almost 20 years later, he’s getting his due thanks to Michael Lewis’s book and this Scott Rudin produced movie. I couldn’t be prouder.

But the movie’s greatness is thanks to Miller and his top top screenwriters Aaron Sorkin and Steve Zaillian. This is “The Social Network” with heart and soul. “Moneyball” also has the underdog spirit–missing from that well made but cold movie. There was never much sympathy in the former movie over which of those obnoxious kids got a cut of millions of dollars. But in “Moneyball” we are routing for Pitt and his team (and Jonah Hill as his Yoda, Paul Brand).

Brad Pitt makes this movie. By the time the A’s are in their famous 20th game–where they blew an 11 run lead–Pitt has completely abandoned his tabloid movie star persona and absorbed into Bean completely. The intelligence that informs his charity work, his real life thoughtfulness, seeps out of him and onto the camera. It’s extraordinary to watch. It also makes it possible for Miller to end “Moneyball” not with the bang of a rousing win–a “Rocky” moment–but a sweet, rich flourish. And that’s when “Moneyball” becomes so much more than just another sports movie and a real work of art.