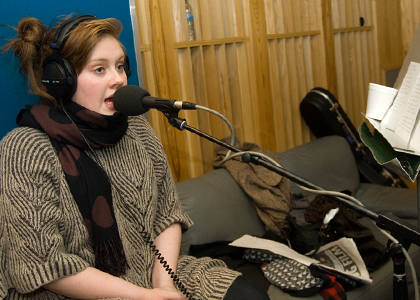 The MTV Video Music Awards are so hard to watch, especially with the aftermath of a hurricane and a winning Yankee game occurring simultaneously. I don’t want to see Kim Kardashian or her like again. Aside from sampling Otis Redding, what the hell are Kanye West and Jay Z rapping about?

Britney Spears beats Adele for an award. What? Justin Bieber, who now looks so much like Ellen DeGeneres it isn’t funny, thanks Jesus because–there would have to be a Jesus to make Bieber possible. He’s a miracle of self invention. It’s just a cavalcade of crap, meaningless awfulness with the exception of Lady Gaga trying something new and Neyo — so talented–giving in to someone’s marketing plan. Let’s not forget the pitiful plan to rehabilitate Chris Brown. That dog won’t hunt.

And then there’s Adele. Simple, elegant, unadorned. She just got up and sang “Someone Life You” with a piano accompaniment and blew everyone away. It doesn’t matter if she wins or loses. She’s already won. Her album has been number 1 for 33 weeks. You can’t do better than that. She doesn’t need MTV, the Marketing TV Network..

One nice digression: Dave Grohl and the Foo Fighters won something. I like them. What the heck. The Foos appearance was the only link to actual rock and roll. And he gave a shout out to Judy McGrath. Classy. Otherwise, yuck yuck yuck.