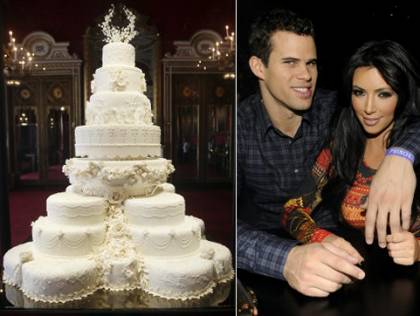 I reported on June 22nd that a top level People magazine insider said the magazine “would never” pay anything like $1 million for photographs of the dreaded Kardashian wedding. But now the word is out that People actually forked over a total of $1.5 million for the pictures of this hideous extravaganza. The magazine’s website is already featuring lots of minute details about the nuptials, including the size of the cake and the hemming on the dress.

The bigger question is, Who are these people? Why is the tabloid media fascinated with them? Fiance Kris Humphries is an athlete, but he’s not Michael Jordan. Kardashian is just part of a publicity and attention seeking family hellbent on being famous for being famous–and getting paid for it. I don’t get it. Who cares about these people? Aside from their late father knowing how and why O.J. Simpson killed Nicole Brown and Ron Goldman, they are utterly useless.

But maybe it’s the time of year. Last year, it was the Chelsea Clinton wedding. Remember it? The whole media was clamped onto that thing and wouldn’t let it go. Here’s the funny thing: the one year anniversary was barely noticed. So, too, will the Kardashian frenzy seem ridiculous in a year’s time. Meanwhile, the couple will rake in media bucks for reasons so bewildering. Consider that most of Somalia is dying of starvation.