A few days ago I was told that there had been a lot of trouble with Jim Sheridan‘s “Dream House,” a psychological thriller set for September with Daniel Craig and his new wife, Rachel Weisz, with Naomi Watts. The word was that director Sheridan, one of the greats, was significantly at odds with Morgan Creek’s Jim Robinson. Univeral is releasing the movie, and would have high hopes considering the stars’ high profiles. My source said, emphatically, “The movie is unrelease-able.” Now the trailer is out, and you can see it in our video player below. It’s a weird one in that it seems to give away the entire movie, and is at the same time utterly confusing. Sheridan is a four star director, so I’m sure he’s done everything he can to make the film work. The release date is still two months away, and a lot can happen between now and then. Let’s cross our fingers. But there must be a better way to make a trailer for this film, at least one in which we don’t get all the plot points. It looks a lot like “Shutter Island,” which I’m still trying to figure out. Meantime, Indie Wire’s The Playlist recently noted that “Dream House” has gotten an R rating after a lost appeal, and that the poster is terrible. PS the poster does look like what happened to Joan Chen in “Twin Peaks.” 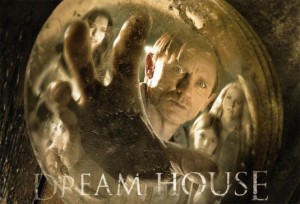