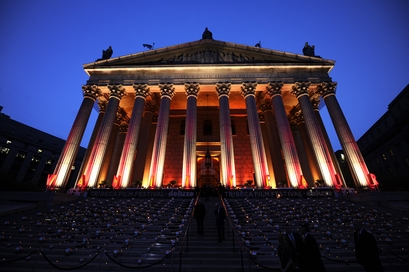 You kind of know a party is bad when pictures show up the next day–and publicists and hosts are photographed. It means the celebrity guests were not plentiful. A quick check of Wire Image and Getty Images tells a sad story: pictures of publicist Howard Rubenstein and of various Time editors and publishers. Ouch! Sting and Bruno Mars came, but they were also there to serenade the guests. (By the looks of things, Sting would rather have been at the dentist.) Patti Smith made it.

Movie stars were not abundant: Mark Wahlberg and Blake Lively were the top names. Anna Kendrick, from “Up in the Air,” was there although she wasn’t on the Time 100. Blake comes from TV really, and there were a lot of TV people: Darren Criss and Chris Colfer –not the main stars, even– from “Glee,” Amy Poehler and Seth Meyers from “SNL.”

Either there were a lot of stars there who didn’t take pictures, or it was a light night. Where were Mark Zuckerberg? Scott Rudin? (Irony: Harvey Weinstein is in the pics.) Colin Firth? Matt Damon?  Oprah? Our pal, and hers, Gayle King, filled in. And there are lots of people in the pics who weren’t even on the Time 100. Oh well, there’s always next year. And maybe Martha Stewart got some tips from Suze Orman. The New York Post says 42 of the 100 made it, but really, only about 20 were of much interest.

The winner: Vanity Fair. Quick–which of these groups looked like more fun anyway?