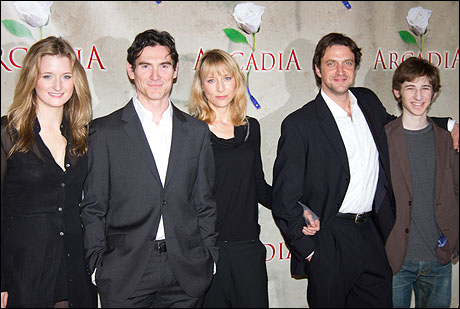 “Arcadia” is back after 15 years. Tom Stoppard‘s amazingly wonderful play, now directed by David Leveaux, is better than ever. It’s supposed to be on for three months, but they could extend the run. I hope they have to: Billy Crudup simply steals the show as Bernard, an egomaniac literary historian with a posh British accent. Crudup played another “Arcadia” character in 1995– Septimus, the “hero” of the play in the part that’s set in 1809. Suave, playboy Septimus is more sympathetic certainly than modern day Bernard–the play cuts back and forth between 1809 and the present on the same British estate. In the new version, Septimus is played by Brit actor Tom Riley, 29, a new sensation if he plays his cards right in New York. (He’s a star in the UK and soon to be here.) But it’s Crudup–he told me last night he preferred playing Septimus because “he’s the hero. Bernard is the bad ass.” Well, everyone loves the bad ass. Circle Billy Crudup for a Tony Award–probably as featured actor in a play, and “Arcadia” as Best Revival of a play. Also, Lia Williams–new to Broadway, as is Riley–could really be a Best Actress nominee. She’s sensational as Crudup’s foil. This is not to take anything away from Margaret Colin, Raul Esparza, Grace Gummer, Byron Jennings, and the rest of the cast. They were all applauded to a long standing ovation, by the way, from Julianne Moore and Bart Freundlich, Kim Cattral, Josh Hamilton, Elaine Stritch, Hamish Linklater, Richard Kind, and Jim Dale, plus famous acting sisters Juliet and Hayley Mills, among others. Grace Gummer, one of Meryl Streep‘s acting daughters, brought her sisters and dad. Mom Meryl is in London making her Margaret Thatcher movie. But I was assured she’d be home in two weeks to see Grace light up the stage.