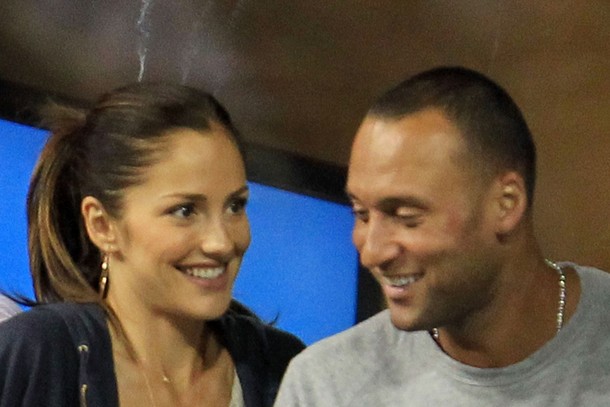 The Post got Jeter and Kelly for not getting married according to their plan by putting the couple at Number 1 on their “Out” list for 2011.

Hysterical. Whether or not he gets married, Derek Jeter is always, totally on the “In” list every year. The Yankee captain constantly proves his worth, be it on the field or speaking for the Yankees. When he’s taken the mic to talk about the closing of the old stadium or the passing of George Steinbrenner, Jeter has shown himself to be articulate in addition to a team player.

The Post also has a bunch of ins and outs that don’t really make sense. The Bowery is “out”? The whole avenue? Indeed, the Bowery is very much “in”. The old Bowery bums would never recognize it. Except for losing CBGB to the hateful BRC, the area is booming.

Jimmy Fallon is in. His show is rocking, and Jimmy is commanding late night. Rosie O’Donnell is in, for graciously commanding a huge charity for kids and giving them a place to learn theater. Elaine’s will always be in. The East Side Social Club is in. The new Lincoln Center construction is in. Well done! So is The Lambs Club Restaurant, councilwoman Christine Quinn, producer Scott Rudin, and the Weinstein Company. Downtown Records is in, for putting out terrific music like Cyndi Lauper‘s blues CD, “Memphis Blues.” Billie Jo Armstrong of Green Day is in for constantly supporting “American Idiot” on Broadway.

What’s out? Mayor Bloomberg and his sidekick, Janette Sadik-Khan are out, out, out. The Post, obviously, is out. Greedy landlords are out: there are empty spaces all along Madison Avenue. Wal Mart is out. “Holiday” by Vampire Weekend is Out with a capital O. So is the elongated video announcement in the cabs: the only decent cab is that Toyota crossover. Out are the small Toyotas and the Nissan Sentras. You have to ride sideways in them. Out are concrete turning lanes and no parking spaces on the avenues. Goodbye! Already out is Madonna’s movie about the Duke and Duchess of Windsor. Completely out is Mel Gibson and maybe Jodie Foster if she’s not careful.

Always in: The Four Seasons restaurant. Always out: The Lion.

Good signal in: Scott Greenstein’s Sirius XM; Bad signal out: the waste of 102.7, what used to be WNEW FM

In: Regis and Kelly. Out: The Talk.

In: One Life to Live. Out: Desperate Housewives.

Out: columnists with axes to grind and no facts to find.

In: Listening. Out: in ear headphones or anything else that blocks connecting with the world.