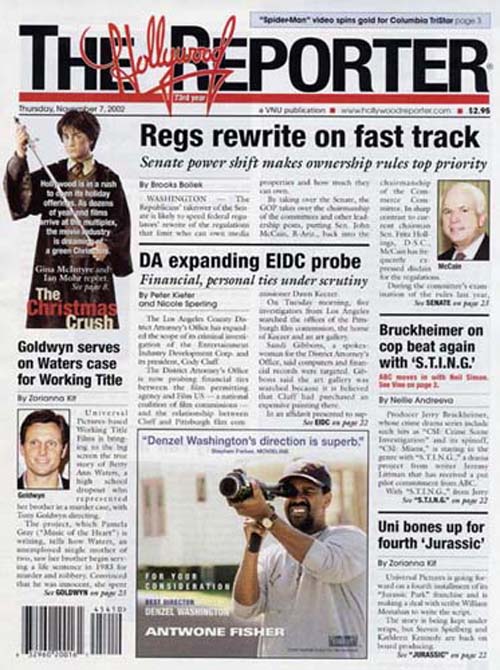 And so it goes: Elizabeth Guider, the editor of the Hollywood Reporter for three years, is gone. The official announcement came today.

Now the Reporter heads toward tabloidville under the guidance of Janice Min, former editor of US Weekly, and Richard “Mad Dog” Beckman. It is a sad day because once this experiment is over, a well known franchise will be gone too.

From what I’m told the Reporter goes weekly and drops its daily editions either this Friday or next. Already you can tell the changes on their website. Suddenly news of Ashton and Demi’s marital problems, Laura Dern’s divorce from Ben Harper, and Pat O’Brien’s ridiculous open letter to Lindsay Lohan, are creeping in.

The question is, how can the new Reporter combine tabloid gossip on the very low end with industry news at the top? It doesn’t seem like a natural fit. Hollywood execs looking for trade news will just use Variety. They’re certainly not going to wade through wh0-wore-what stories to find out who’s running Comcast NBC. And if your interest is in Best Abs or Celebs Caught off Guard, news of British TV sales aren’t going to float the boat. My guess is TheWrap.com will fill out the remaining trade news.

So: goodbye Hollywood Reporter. You’re about to join The Brown Derby and Schwab’s. Hello, Britney. And of course, the Kardashians (the Gabors without glamour). Yeesh.

UPDATE: They also sacked Andy Wallenstein, who’s been running the website and doing a fantastic job. He’s also been writing columns (er, blogs, whatever, on a variety of interesting subjects.)