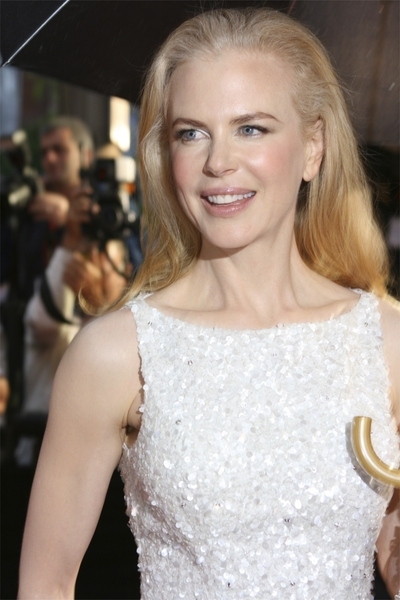 Nicole Kidman and Keith Urban shut down a whole city block last night in Toronto in front of the Elgin Theater. The reason was the premiere of Kidman’s “Rabbit Hole,” a gem of an indie movie that should resonate with audiences and win Nicole even more fans.

Kidman is accessible, funny and human in “Rabbit Hole”–moreso than in ages. You can tell she enjoyed producing and starring in it, too. After the film, she, Keith and I talked for quite a while and caught up–our first chat since last February’s Grammy Awards.

They told me that two year old daughter Sunday Rose is walking and talking up a storm–‘Dancing, laughing. having a ball.” I don’t think we’re going to see Sunday Rose trotted out for constant p.r. either, the way Tom Cruise and Katie Holmes have exploited their kid in the papers. (I’ve rarely seen a child invented for celebrity the Suri has been.)

Kidman is loving living in Nashville. It’s a good thing she’s a meat eater and not a vegetarian, I said to Keith, since there’s so much good BBQ. “I think she’d love it there anyway,” he said.

Urban is working on a new album of all new material. He’s licensed it to Capitol Records, but his deal his over. And he’s happy to be a free man in such a crazy record business.

Over at Parade.com this morning, my headline for this story was “Nicole Kidman To Die For Again.”

It’s true. Kidman is a delight in “Rabbit Hole.” It’s based on the Broadway play by David Lindsay Abaire. Cynthia Nixon won the Tony Award for playing Becca, the main character. It’s a rock solid play full of laughter and sadness that the playwright has opened up beautifully for a film.

But mostly it’s Nicole, who hasn’t played a “regular person” in a contemporary drama on screen in — I don’t know, did she ever? Maybe in “Margot at the Wedding,” a little seen indie. But here she is the Kidman from “To Die For,” and even with the atttiude from “Australia”–sardonic, sarcastic, wise, and sexy.

Director John Cameron Mitchell, who you might have thought would go campy, has played “Rabbit Hole” straight. He’s set up a terrific family dynamic with Nicole, Aaron Eckhart as her husband, Dianne Wiest as her mom, Tammy Blanchard as her sister, and Giancarlo Esposito as the sister’s boyfriend.

“I read the review of the play in the New York Times.” Nicole told me. “As soon as I saw the script, I knew I could do it.’ She was wide to get the playwright to write the screenplay. “I loved her sardonic sense of humor.”

So do I! A hit for Nicole. If the film can be released in time, we may be seeing her at the Oscars next winter.