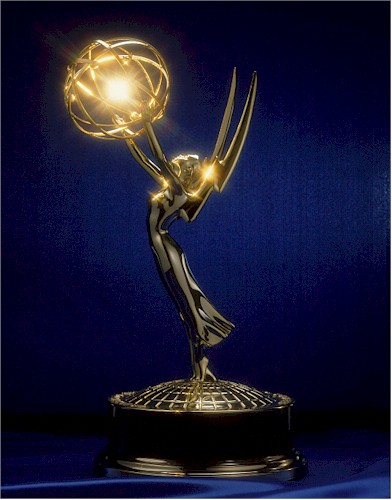 It was the night before the Emmy Awards and all through Hollywood, the TV business got its chance to party.

But you know, in the end, the pre Emmy stuff involves about 100 actors, literally. One or two big names come out, the rest are likeable people. The heavy hitters, and the movie stars who’ve done TV over the year, will show up tonight at the broadcast, the Governor’s Ball, and the HBO gala.

To wit: the Motion Picture Fund party, dubbed “The Evening Before” aka “the Katzenberg party” isn’t held at the Beverly Hills Hotel like the movie version in January. It’s instead set up in Century City, behind CAA’s “Death Star” headquarters. Everything about it is less. One guest told me: “There wasn’t a single person from the feature world unless you count Clare Danes.” Otherwise, it was all the TV stars and the casts of the top shows.

“Ricky Gervais hung out with The Office people, and they were talking to the 30 Rock people. It felt like a TV party. It lacked glamour.”

It didn’t help that there were protesters outside from the building’s janitorial union. Also, the Motion Picture Fund is under fire for trying to close its long term care facility, and for infractions cited by the state about the hospital’s care.

The actors didn’t seem to mind since they were waiting for gift bags. In the past, the Katzenberg party offered IPods, customized sneakers, and lots of expensive stuff. This year, I’m told, the gifts were “lame.” There was jewelry from target, some perfume and shampoo stuff, and a chance to shoot baskets. “There was something about golf, too,” I was told.

I did see Joel McHale of “Talk Soup” and “Community” (an NBC sitcom) lined up with a bunch of actors waiting for his ride around 1am, swag in their arms. It made me wonder if the patients in the Motion Picture Home long term care get the same nice soaps. There was also jewelry from Target.

I’m also told the big discussion of the night was how all the NBC stars could be at the party and not at NBC Universal’s throwdown at Spago. But the people at Spago of note were Hugh Laurie (not an NBC star), Maura Tierney, Mariska Hargitay, and a lot of agents. Jimmy Fallon was at Emmy rehearsal. No word on the whereabouts of NBC’s biggest stars, Steve Carell and Alec Baldwin.

Later on, Lorne Michaels had a secret private party at the Sunset Tower Hotel. How do I know? The receptionist there told me about it. Unclear if Betty White attended.

Two better soirees, in retrospect: BAFTA/LA at the Century Plaza Hyatt, where I met Henry Ian Cusick, “Desmond” from “Lost.” And also Joel Murray, “Freddie Rumson” from “Mad Men.” Plus Stephen Tobolowsky explained “Memento” to me from his perspective.

And Showtime brought Edie Falco and Michael C. Hall, with all the “Nurse Jackie” and “Dexter: casts, as well as the magnificent Anna Deveare Smith, to the SkyBar at the Mondrian.

Earlier in the day I ran into Sigourney Weaver, promoting a Disney movie, “You Again,” at the Four Seasons. “But you’re not blue this time,” I argued.