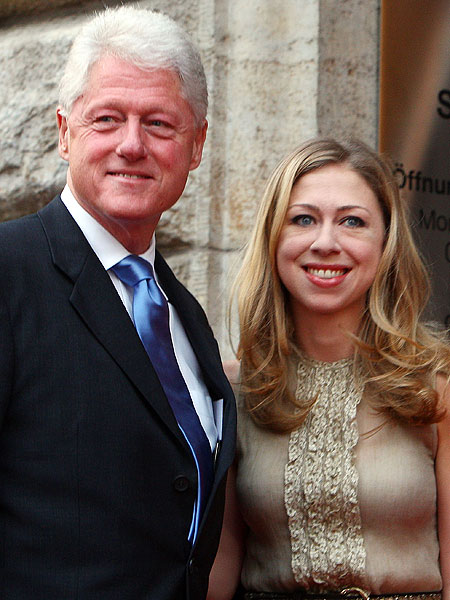 I thought I’d stay out of the whole Chelsea Clinton wedding saga until I actually spoke to someone who knew what was going on. Almost everything that’s been reported, aside from the place and the designer of the wedding dress, has been wrong apparently.

For one thing, the wedding costs around a million dollars. Much of it has to do with security and the Clintons putting all the guests up around town in various hotels near Rhinebeck, New York.

Yes, the dress is from Vera Wang.

The groom will have two best men, his brothers. Marc Mezvinsky has an interesting family set up. He is one of 11 siblings. His mother adopted two daughters (one from Korea, one from Vietnam) before he was born. His father had four children. When his parents married, they had Marc and his brother. They adopted three more boys from Vietnam. The parents are now divorced.

The family is devoutly Jewish. The wedding will be presided over by the Mezvisnky’s rabbi and a Clinton family minister. There are no plans for Chelsea to convert to Judaism at this time. But she’s been attending seders and High Holiday services and the like for the last few years, says a close friend. Bill and Hillary have been to at least one Mezvinsky seder.

How Jewish are the Mezvinsky’s? Well, all the kids have been raised in that faith. A friend told me that a few years ago, the biological father of one of the adopted kids turned up and wanted to take him — the boy– on a trip. “The boy said, I can’t go then. I’m being bar mitzvahed that weekend.”

As for the guest list, the only celebrity who reasonably might attend is Barbra Streisand. The Clintons are also close to Steven Spielberg and Kate Capshaw. They are expecting close friends who have also been strong supporters, like Alan and Susan Patricof. Many close friends of each set of parents have been excluded.

“The wedding is really about family and Chelsea and Marc’s friends.” Also, do the math: the Mezvinsky’s core family is 13. Exponentially, they have a lot of people on their botton line.

Definitely coming: Roger Clinton, plus Hillary’s mother Dorothy and her brother Hugh, and his family. But there are a lot of people who might have been invited two or three years ago who aren’t on the list now: Al and Tipper Gore, Ron Burkle, etc.

You can surmise that Huma Abedin, Hillary’s right hand person, who just married Rep. Anthony Weiner, will be there–the Clintons were just involved in their wedding. Hillary has had two big staffs- as senator and as Secretary of State. Bill has a big staff, too. Count all them in plus spouses or dates.

More to come, I’m sure. It’s going to be Rumor Weekend.