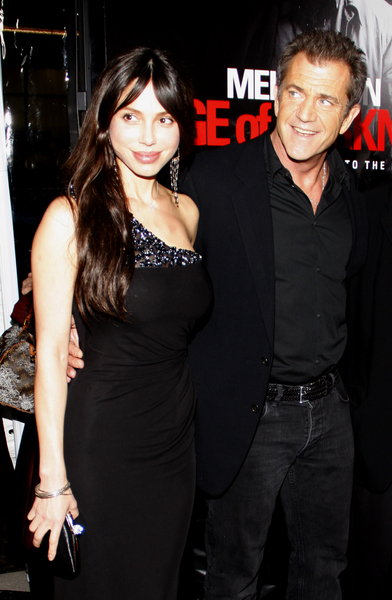 If you’re following the Mel Gibson saga, it’s handy to lay out a timeline.

But the recordings we’ve been deluged with? I am told they were made a month later, approximately early February, over two long nights.

In between these two events, Oksana–despite the alleged beating–went with Mel to the opening of “Edge of Darkness” and then on a European promotional trip.

The recordings–which are digital and not on any kind of tape–came after the trip and possibly 5 weeks after Mel allegedly hit Oskana and baby Lucia.

Now Oksana’s text messages to and from Mel have made it to Radar “mysteriously.”

Here is the transcript from Radar of the text messages:

MG: Oksana, I wasn’t safe for you last night. I spent two hours with a therapist today and have regained some perspective. What I’m telling you know if I am safe & would like to come by and make amends to you, sascha and Lucia. I won’t stay just let you say your peace and I’ll say mine. Let me know if it’s alright!

MG: Let me know either way.

MG: It’s important that I apologize to sascha before he goes.

MG: Please respond one way or another.

OG: I have two broken front teeth and a concussion.  I can not c u today, I’m hurting. U can apologize to Sacha some other time.

MG. Did you get them fixed yet?

MG: I need to see you this evening & then I promise I’ll leave you alone
for as long as you want

So this exchange is a full month before the phone recordings. Just to review the recordings: Mel uses the n word, talks about Oksana being raped, threatens to kill her, screams incessantly, uses the foulest language ever, maybe breaks a glass door.

Even so, Mel and Oksana then attended a pre-Oscar party on March 5th in Hollywood. They looked like hell.