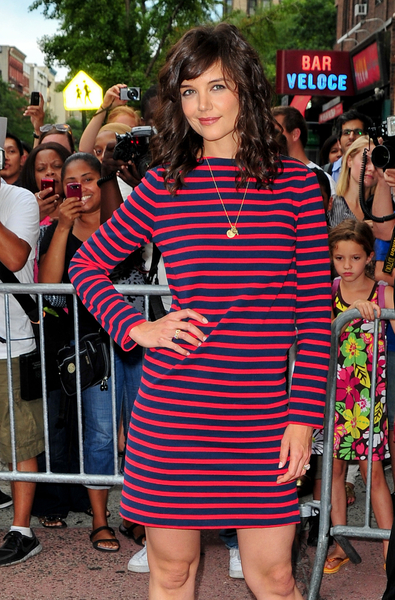 Katie Holmes blew into town to attend Monday night’s New York premiere of “The Extra Man.” She briefly walked the red carpet, avoiding the screening and after party, before moving on to Toronto for an early call to the set of the tv mini-series “The Kennedys.” She plays Jackie Onassis, a role not unlike the one she plays in real life as Mrs. Tom Cruise.

Expected not to attend, Katie was brave to support writer/director Shari Springer Berman and her co-stars Kevin Kline and Paul Dano considering that many reviewers after the movie’s opening at Sundance found her performance “weak.”

As Mary, Holmes plays a vegan office mate and heart throb for Paul Dano’s Louis Ives, a nerdy devotee of F. Scott Fitzgerald‘s “The Great Gatsby” with a taste for cross dressing; in one scene he sports a black lace teddy you may wish to have seen on Holmes, were she not slated for the “straight man” role in a movie that abounds in eccentrics.

It’s hard to say whether the part was written lamely, or if Holmes is just lackluster in it. The days of “Pieces of April” are farther and farther away.

Kevin Kline as Henry Harrison heads this quirky concoction of character actors, the extra man or social escort to haute monde matrons. Lynn Cohen and the magnificent Marian Seldes cheered him on from the audience. Tracey Ullman, scouting for a seat, could have rounded out this eccentric cast.

Before the screening began, writer/director Shari Springer Berman (her partner Robert Pulcini was absent),  dedicated the opening at the Village East Cinema to the memory of recently deceased Harvey Pekar. “American Splendor,” also directed by Berman and Pulcini, was based on his work.

Novelist Jonathan Ames–creator of HBO’s Bored to Death as well as the author of the novel on which The Extra Man is based–was next at the microphone. He performed three yelps, which sounded like a Shofar being blown on the High Holidays. Yes. he yelped. Loudly.  It was fairly odd. Ames also noted that this location on 2nd Avenue was a one-time Yiddish Theater