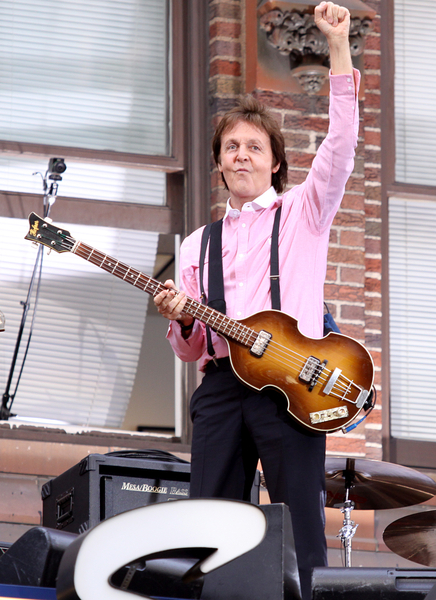 What a night for Ringo Starr: Paul McCartney and Yoko Ono put aside their usual differences and surprised the ex Beatle on stage at Radio City Music Hall for his 70th birthday on Wednesday night.

McCartney was a total surprise to Starr–he appeared at the end of show, strapped on a guitar and launched Ringo’s band into the Beatles’  “Birthday.” It was historic since the Fab Four never played the song live anywhere. Tonight, Ringo played drums and Radio City was like Shea Stadium in 1966. McCartney was spot-on, too. Brilliant.

Just before that, Ringo had been celebrated by a raft of stars and musicians at the end of “With A Little Help from My Friends,” his Beatles signature song. Suddenly on stage was Yoko Ono, looking grand in a white hat, and boogeying like she was half her age. At one point, Ono grabbed a mic and signaled for it to be turned on. Wiser heads prevailed because they thought she might warble. Instead, Ono sweetly wished Ringo a happy birthday.

In the audience was Olivia Harrison, the lovely and loyal widow of George Harrison. Also on hand were Peter Asher, the record producer and long time pal of the Beatles (his sister Jane was once engaged to McCartney) plus McCartney’s lawyer and brother in law, John Eastman, with wife Jody; and Ringo’s stepdaughter, Francesca Gregorini, co director of the film, “Tanner Hall.”

And surprise! actor Hayley Joel Osment–all grown up and graduating from NYU on August 5th. He doesn’t see dead people any more–but does see a great film career in front of and behind the camera.

As for the main show itself, it ran a little less than two hours and was the usual hodgepodge party that Ringo’s All Starr Band endeavors usually are–the musicians are all great, but sort of two hit wonders who create a jukebox effect around the famous drummer. The outstanding moments belonged to Edgar Winter, whose “Frankenstein” is an epic masterpiece. Winter plays almost all the instruments, too, from sax to keyboards to vibes. This man is underrated. Rick Derringer was also very, very good, first playing “Hang on Sloopy,” his 1965 hit, and then “Rock and Roll Hootchie Koo” from almost a decade later. These are consummate musicians.

The show itself was a little Ringo-lite. But maybe as he celebrates 70 Ringo is happy to turn over the showier aspects to his compadres, and just relax. No one can say he doesn’t deserve it. And if you went to Radio City for a birthday party, you got a great and memorable one.

Do we feel old? Why yes: Ringo’s grand kids also came out at the end. But he’s young enough looking that he’s no grandpa. Still think of it: Ringo is indeed a grandfather. Meanwhile, Paul McCartney is such a mensch–he really looked like he was going to cry as he and Ringo hugged on stage. Later I overheard Nils Lofgren–the amazing guitarist–introduce himself to Paul. “You know, I play with Bruce Springsteen, I played on Ringo’s first solo albums,” the legendary musician said to Paul. McCartney looked astonished. “Of course I know who you are!” he said, pumping Lofgren’s hand vigorously.

PS I did run into Sid Bernstein, now 92 and going strong, the original promoter who brought the Beatles to America. He’ s never let them forget it, too. God bless Sid Bernstein. Without his ingenuity and foresight, none of this would be happening now.